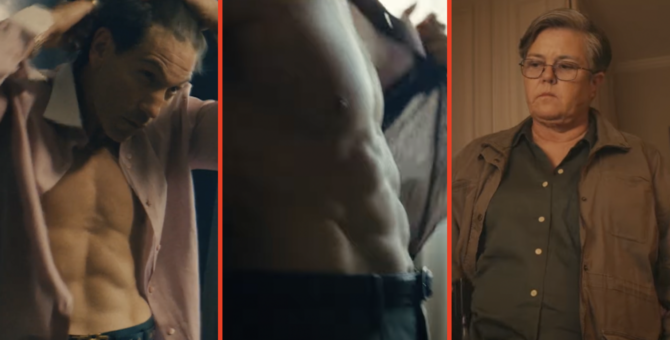 Well, it’s right there in the headline: Showtime’s upcoming drama series American gigolo has abs and Rosie O’Donnell—what more could a gay possibly want in their television programming?

For better and for worse, we’re in the golden age of mining classic films and other old IP for new content. And, yes, all of these remakes and revivals can be a bit tiresome, but, my goodness, we think the premium cable network might be onto something here!

Based on Paul Schraeder’s 1980 movie of the same name, American gigolo stars Jon Bernthal as Julian Kaye, a Los Angeles escort to some high-class ladies. When he’s framed for the murder of one of his clients, Kaye is sent to prison—only to be released 15 years later for the wrongful conviction. The series picks up there, as the titular gigolo attempts to re-acclimate to the modern-day sex industry and find out the truth about who set him up all those years ago.

Showtime’s first smart move was casting Jon Bernthal as Kaye, a role originated by Richard Gere. Bernthal’s the kind of character actor who’s reliably great in everything—often playing bruisers, baddies, and the occasional brute with a heart of gold. Though he’s taken the occasional lead (most notably in Netflix’s bygone Marvel series, The Punisher), American gigolo looks like it could be the star turn this talented actor’s always deserved.

Oh, and did we mention he’s jacked? That too!

The other major selling point here is that this show promises a great supporting part for Rosie Thee O’Donnell, further proving that we’re living in the Rosie-ssance. The icon will play Detective Sunday (Hector Elizondo in the original film), the investigator who helped exonerate Julian Kaye, thusly digging her way into a conspiracy much bigger than anyone imagined.

This looks like a far cry from O’Donnell’s former Koosh Ball-throwing public persona, and we can’t wait to see the gay icon dive into such a meaty part.

American gigolo premieres September 11 on Showtime. You can watch its first trailer below: