The premise is simple: a few friends hear about an island in a remote and snowy area with some amazing cold-water surfing, they go to the mysterious island and make “Island X,” a beautiful documentary about their experience along the way. Where is this island, you may ask? Nobody ever speaks the name or exact location (other than it’s on the Bering Sea) in the film and it requires a bit of sleuthing to find out, but I’m certainly not spoiling it here. 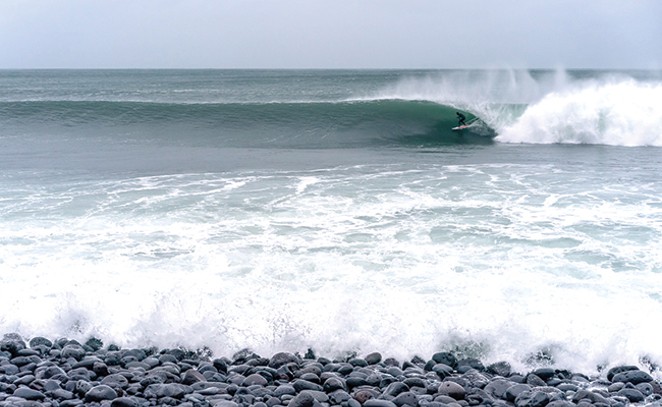 One of the subjects of the doc is Mark McInnis, a born and raised Bendite and brilliant photographer who loves depicting hostile environments. Recently before the making of the documentary, he lost most of his body of work in the Holiday Farm Fire of 2020. “Island X” doesn’t just follow a group of filmmakers, surfers and a photographer on a surfing trip, it also tells McInnis’ story of loss and his joy in creation.

Director/cinematographer Ben Weiland and co-cinematographer Mike Nulty have crafted some breathtaking setups in “Island X,” giving the film such a rich and stunning palate across magnificent frozen vistas and icy textures that even someone as unfamiliar with surfing as I am couldn’ t help but, pardon me, be swept away by the film. There’s such an audacious bravura to the shot compositions that I had to remind myself I was watching a documentary and not a hundred-million-dollar adventure movie.

A surf movie in a snowy and freezing environment is also something I’ve never seen before, but no one ever looks miserable; They’re thriving and having the time of their lives on Island X.

“I’ve always been drawn to more hostile, cold, remote environments,” says McInnis. “I think it’s simply a byproduct of where I’m from. Growing up in the PNW, it’s just part of your daily life. I lived on the Oregon Coast for eight years or so and loved it so much. It was truly the place where I felt the most at home. So, chasing surf in environments like that was only natural.”

This interest has led him all over the world.

“I’ve been to Scotland, Ireland, Iceland, New Zealand, Canada, Alaska and Chile looking for remote surf spots,” McInnis told the Source. “But this is the Bering Sea. This is a different beast entirely. So that part of the process was new and exciting. The Bering gets its lore from chaos, violence and death. It’s known as the deadliest sea on the planet. So going somewhere with such a reputation was exciting and fresh.”

I couldn’t help but relate to McInnis and the loss of his work. I think about the thousands of reviews and stories I’ve written over the years and the thought of losing them all is overwhelming, but McInnis didn’t let it slow him down. “I don’t think it was hard to start creating content again,” says McInnis. “It was just hard losing so much previous work. That body of work sort of defines an artist in a way. So when I lost it all, it felt like I had lost myself in a sense. But I’m a photographer. It’s really all I know how to do for a profession, so I didn’t have to talk myself into it. I knew I’d keep going and pursuing my passions, but it felt like a clean slate, a new beginning.” 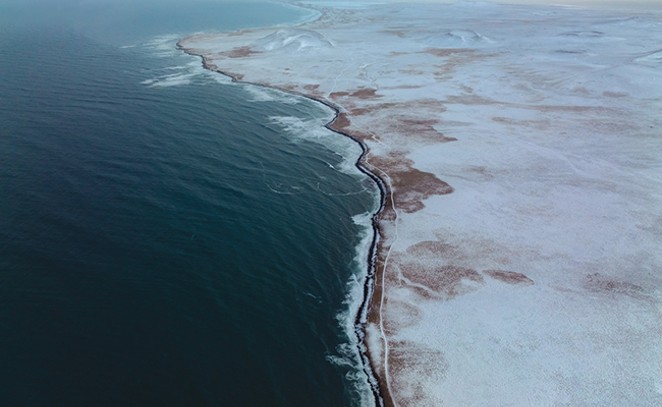 For McInnis, getting to screen the film at the Tower Theater this week is a perfect capper to the “Island X” experience. “My father was on the board for the “Save the Tower” movement back in 1997 and was actually the person responsible for procuring the largest donation to the cause,” says McInnis. “My grandparents, Marvin and Eda Anderson, also have a front row seat in the balcony dedicated in their honor. So, it’s a great honor to show such a personal film here, at home, in this very historic theatre.”

“Island X” shows surfing in a way I’ve never seen it done across an environment that should be inhospitable for humans to do such things, but the team makes it look fun and sort of effortless. Adventure documentaries aren’t normally as gorgeously composed as this one is, either, so they not only managed to have a badass surfing trip, but captured some astounding footage along the way. Catch this on the biggest screen possible.