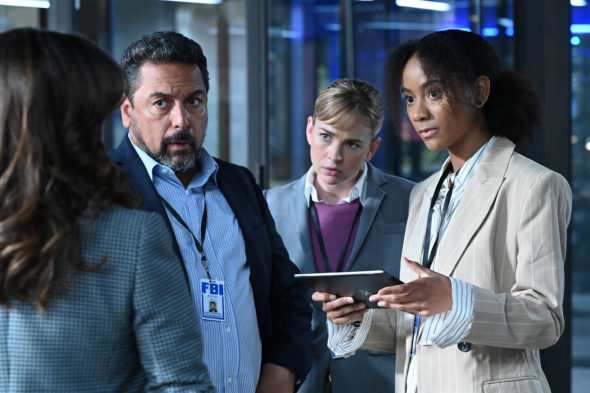 Simone’s got a lot to juggle in her new life. Has The Rookie: Feds TV show has been canceled or renewed for a second season on ABC? The television vulture is watching all the latest cancellation and renewal news, so this page is the place to track the status of The Rookie: Feds, season two. Bookmark it, or subscribe for the latest updates. Remember, the television vulture is watching your shows. Are you?

What’s This TV Show About?

Airing on the ABC television network, The Rookie: Feds TV show is a spin-off of The Rookie from a backdoor pilot. The series stars Niecy Nash-Betts, Felix Solis, Frankie Faison, Britt Robertson, Kevin Zegers, and James Lesure. Guests in the first season include Jessica Betts, Tom Arnold, Eric Roberts, and Deniz Akdeniz. The story follows Simone Clark (Nash-Betts), the oldest rookie in the FBI Academy. Both empathetic and exasperating, Simone is a former guidance counselor and the mother of twins. As the story begins, Simone graduates from Quantico and heads to Los Angeles to start a new life.

The first season of The Rookie: Feds averages a 0.34 rating in the 18-49 demographic and 2.28 million viewers in the live+same day ratings (including DVR playback through 3:00 AM). While these numbers don’t include further delayed or streaming viewing, they are a very good indicator of how a show is performing, especially when compared to others on the same channel. There can be other economic factors involved in a show’s fate, but typically the higher-rated series are renewed and the lower-rated ones are cancelled. Find out how The Rookie: Feds stacks up against other ABC TV shows.

ABC
As of September 29, 2022, The Rookie: Feds has not been cancelled or renewed for a second season. Stay tuned for further updates.

Will ABC cancel or renew The Rookie: Feds for season two? The series is a spin-off to another ABC show, The Rookie, so I’m guessing they’ll be doing some crossovers to cross-promote the shows (both series shoot on the same lot). Both series are produced by ABC Signature, so all of the various ways to monetize them benefit the Disney parent company. I’m confident that The Rookie: Feds will be renewed. Could other rookie shows be on the way? I’ll update this page with breaking developments. Subscribe for free alerts on The Rookie: Feds cancellation or renewal news.

What do you think? Do you hope that The Rookie: Feds TV show will be renewed for a second season? How would you feel if ABC canceled this TV series, instead?

Check out our ABC status sheet to track the alphabet network’s new series pickups, renewals, and cancellations. You can find lists of canceled shows here.