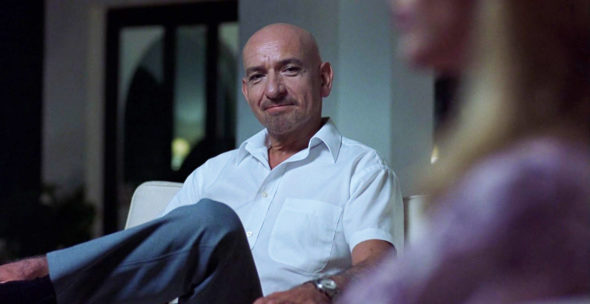 After a long delay, work is underway on the Sexy Beast TV series. Paramount+ has announced the cast for the prequel series to the 2000 film, which stars Ray Winstone, Ben Kingsley (above), Ian McShane, and Amanda Redman. James McArdle, Emun Elliott, Tamsin Greig, and Stephen Moyer will star in the prequel, which has just started filming in Liverpool.

Paramount+ revealed more about the upcoming series in a press release.

James McArdle (“Mare of Easttown,” “Angels in America”) leads the cast as Gal Dove and Emun Elliott (“The Rig,” “The Gold”) stars as Don Logan – the duo are best friends and small-town thieves , living the good life in ’90s East London. Sarah Greene (“Dublin Murders,” “Normal People”) is Deedee, a captivating adult film star, who has the potential to turn Gal’s whole life upside down. Stephen Moyer (“Shots Fired,” “True Blood”) is Teddy Bass, a rising name in the gangster world, who Gal and Don are offered the chance to work with on a high-profile heist. Tamsin Greig (“Episodes,” “Friday Night Dinner”) is Don’s stern and formidable older sister Cecilia. The prequel series will explore Gal and Don’s complicated relationship as Gal finds himself descending into the seductive madness of the London criminal world during the vibrant and volatile 1990s, while falling in love with DeeDee.

“I feel so fortunate to be able to explore these beautifully crafted characters a decade before we met them in the original story,” said showrunner Michael Caleo. This series has been a great passion of mine for many years and I cannot wait to see it come to life with this amazing cast.”

The series, part of Paramount+’s strategy to commission 150 international originals by 2025, will debut in 2023 in the UK, US and other international territories where the streaming service is available. Paramount+ continues to expand its global footprint and is set to launch in France, GSA and Italy later in 2022. SEXY BEAST is one of the first original dramas commissioned in the UK that will debut across Paramount+ internationally, with additional series including THE FLATSHARE, A GENTLEMEN IN MOSCOW, THE BLUE and THE BURNING GIRLS.”

A premiere date for the Sexy Beast TV series will be announced later.

What do you think? Are you planning to check out Sexy Beast when it eventually debuts on Paramount+?