“One thing led to another, and I just quit doing other jobs and started doing this full-time,” he said.

When a firearm is used in a TV show or movie, Cannon is the person to put it in the actor’s hands and retrieve it after the scene. Some days on set can last 12 to 15 hours a day, so understanding the film industry is necessary as well as teamwork.

“You have to be strict and conscious of what you’re doing and sometimes that doesn’t match the film industry. On some of these big elaborate sets, they want you to hurry up and reset the scene because they are losing light or whatever. You have a team of guys to help and you just have to build your confidence in them,” he said.

Cannon can build this confidence in his team since he has been with them for months on end. He is on a movie set working usually eight to nine months out of the year. His job has taken him to India, Thailand, and, most recently, Prague to film “Extraction 2″ with Chris Hemsworth. Cannon said “Extraction” and “Extraction 2″ were among his favorite movies to work on.

“They were also the hardest ones. There were so many guns and so many different locations. It was winter. We were on a train, but it was exciting because it was really fast-paced and a lot of action. You have to adapt everything in order to make it work,” he said.

Cannon will be hired for a movie six months in advance because the logistics of traveling with firearms can be overwhelming. Different countries have different rules for which firearms are allowed in the country. Some countries won’t allow firearms to even be flown over the country. The bottom line is that Cannon must be with the firearms in that country for the entire shoot.

“Some countries won’t allow guns, so we might have to make replica guns. Some airlines won’t fly guns at all. The freight forwarder has to negotiate with all these countries. And then you have to be on the other end as the person of record for your own state department. There’s a lot of responsibilities in a lot of different areas,” he said.

Beyond working on movies and TV shows, Cannon has also been an armorer for video games including Call of Duty: Ghosts, Batman: Arkham Origins and Battlefield: Hardline. In order to get realistic sounds for the games, Cannon will go out to the desert with a trailer of guns and ammunition and record.

“They want the guns to sound as realistic as possible. And in doing that, they’ll have requests that you shoot at a steel plate at 600 yards and get the noise of a ricochet. Some can do that. Some people can’t. I was pretty good at it,” he said.

In July, the movie “The Gray Man” will appear on Netflix and is one of the movies Cannon recently worked on. For this movie, Cannon was in charge of 286 firearms, 180,000 rounds of blank ammunition, and around 400 rubber guns.

“That’s our job. It can be stressful. But in the end, you see the end product. It’s great. Everybody says, ‘I love that movie,’ or whatever, so it’s kind of satisfying to know that,” he said.

Russ Cannon (left) of Kettering works on movie sets as an armorer. CONTRIBUTED 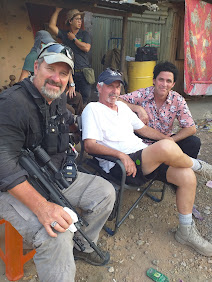 Russ Cannon (left) of Kettering works on movie sets as an armorer. CONTRIBUTED