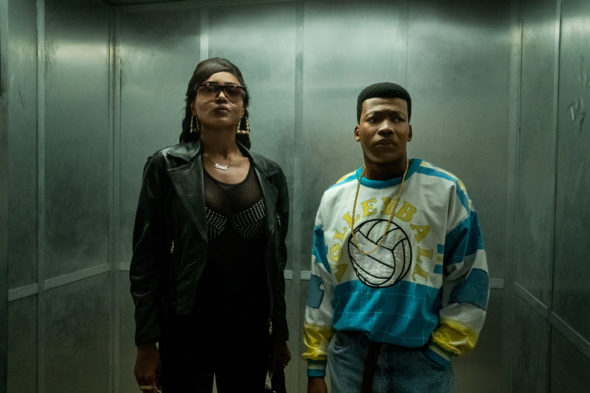 There’s lots more of Kanan Stark’s early story on the way. Power Book III: Raising Kanan is scheduled to return for its second season this Sunday, August 14thand now, the cable channel has renewed the show for a third season.

a crime drama series, Power Book III: Raising Kanan is a prequel to the power TV series. The show stars Patina Miller, Mekai Curtis, Omar Epps, London Brown, Malcolm Mays, Hailey Kilgore, Joey Bada$$, Toby Sandeman, Shanley Caswell, Lovie Simone, Quincy Brown, and Antonio Ortiz. Set in 1991 in South Jamaica, Queens, this show’s story revolves around the coming of age of Kanan Stark (Curtis “50 Cent” Jackson). When we catch up with fifteen-year-old Kanan (Curtis) in the prequel, he is the only child of Raquel “Raq” Thomas (Miller), a cocaine distributor with an emerging network of dealers across the city. She’s a fierce and successful woman who is a force of nature and her son is anxious to join his family’s growing business.

The first season of Power Book III: Raising Kanan averaged a 0.12 rating in the 18-49 demographic and 388,000 viewers in the live+same day ratings (including DVR playback through 3:00 AM). In the traditional ratings, the show is one of the top shows among Starz current scripted series.

STARZ orders a third season of its hit family crime drama series “Power Book III: Raising Kanan” ahead of the upcoming season two premiere on August 14, it was announced today during its 2022 Summer Television Critics Association presentation. Production will start this summer in New York. Averaging nearly 9M viewers across platforms in its debut season, the show had one of the best performing first seasons in STARZ history.

Set in the early 1990’s, the third series in the “Power” Universe tells the origin story of fan favorite character, “Kanan Stark,” and his entry into the criminal world through his mother, who ruthlessly runs the family’s drug empire. It stars MeKai Curtis in the titular role of “Kanan” and Tony® Award winner Patina Miller (Into the Woods, “Madam Secretary”) as his mother, Raquel “Raq” Thomas.

As previously announced, season two premieres on August 14 with episodes available weekly on Sundays at midnight on the STARZ app, all STARZ streaming and on-demand platforms and internationally on the STARZPLAY premium streaming platform across its complete footprint in Europe, Latin America and Japan . On linear, it will debut on STARZ at 9:00 pm ET/PT in the US and Canada.

“Our passionate and loyal fans have been eagerly awaiting the season two return of ‘Raising Kanan’ to see the continued transformation of a young and naive teenage Kanan Stark into the ruthless, no-nonsense character they know and love,” said Kathryn Busby, President, Original Programming, STARZ. “And we’re thrilled to be doubling down on a third season with this incredible cast led by Patina and MeKai.”

**About STARZ**
STARZ (www.starz.com), a Lionsgate company, is a leading global media streaming platform committed to delivering premium content that amplifies narratives by, about and for women and underrepresented audiences. STARZ is home to the highly-rated and first-of-its-kind STARZ app that offers the ability to stream or download STARZ premium content, as well as the flagship domestic STARZ® service, including STARZ ENCORE, 17 premium pay TV channels, and the associated on-demand and online services. In 2018, STARZ launched its STARZPLAY international premium streaming platform to provide subscribers access to the “best of global SVOD.” STARZPLAY, coupled with its STARZPLAY ARABIA joint venture, has expanded its global footprint into more than 60 countries throughout Europe and Latin America along with Canada, Japan, India and Indonesia. STARZ and STARZPLAY are available across digital OTT platforms and multichannel video distributors, including cable operators, satellite television providers, and telecommunications companies around the world. In February 2021, STARZ launched #TakeTheLead, a multi-faceted and innovative inclusion initiative expanding its existing efforts to improve representation on screen, behind the camera and throughout the company.

**About Lionsgate**
Lionsgate (NYSE: LGF.A, LGF.B) encompasses world-class motion picture and television studio operations aligned with the STARZ premium global subscription platform to bring a unique and varied portfolio of entertainment to consumers around the world. The Company’s film, television, subscription and location-based entertainment businesses are backed by a 17,000-title library and a valuable collection of iconic film and television franchises. A digital age company driven by its entrepreneurial culture and commitment to innovation, the Lionsgate brand is synonymous with bold, original, relatable entertainment for audiences worldwide.

What do you think? Are you looking forward to watching the second season of Power Book III: Raising Kanan on Starz? Are you glad that this drama has already been renewed for season three?