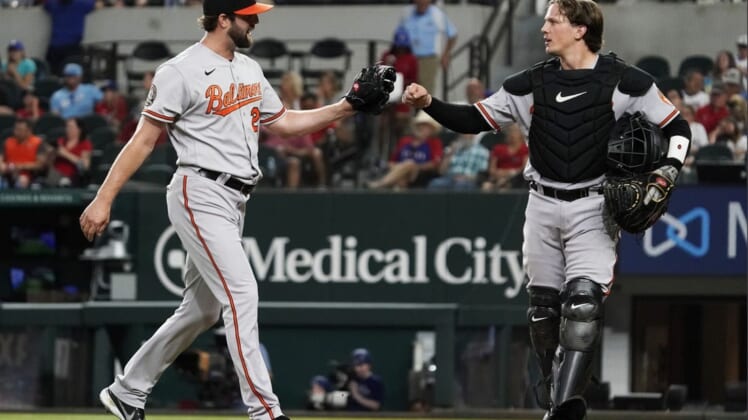 When the visiting Toronto Blue Jays and Baltimore Orioles begin a three-game series on Monday night, they might as well get used to each other.

Their matchups for the rest of the season could prove to be critical for a pair of teams aiming to snag wild-card spots in the American League.

The Blue Jays and Orioles split four games in mid-June in Toronto. They have 15 more meetings, beginning with this upcoming series. The Blue Jays will return to Baltimore in September and October.

“We didn’t do much offensively,” manager Brandon Hyde said. “We need to swing the bat a little bit better than that.”

Yet until Sunday, the Orioles had been on a 21-7 stretch to mark their best 28-game span in almost 24 years.

The Blue Jays won for just the second time in their last five games with Sunday’s 3-2, 10-inning result at Minnesota. Toronto has been on the road for nine games since the All-Star break, going 6-3 in those outings.

It has been a juggling act for the Blue Jays, who used all their available reserve position players to pull out the victory.

“Everyone gets a participation award,” manager John Schneider said.

It’s dicey for the Toronto bullpen these days as well. The Blue Jays activated Trent Thornton on Sunday, though it wasn’t used in Minnesota. This came a day after reliever Tim Mayza was lost to a dislocated shoulder mood from a collision at home plate.

“If anything, he has shown he’s resilient coming off injuries before and we’ll have him down the stretch,” Schneider said of Mayza.

The Orioles are waiting on the return of outfielder Austin Hays, who has been out since Tuesday with oblique soreness.

“He’s getting a little better every day,” Hyde said. “Hopefully, in the next day or two, we can get him in the lineup.”

Hyde has been able to mix up the lineup with numerous combinations. Rookie Terrin Vavra made his first start as a second baseman, though his five-game hitting streak ended on Sunday when he went 0-for-2 before he was lifted for a pinch hitter. In addition, Rouned Odor played as Baltimore’s first baseman for the first time this season.

The Orioles are also looking at outfielder Anthony Santander as a possible fill-in as a first baseman. He has done pregame work at that position.

“I think that’s something he can personally do down the road,” Hyde said.

Right-hander Jordan Lyles (8-8, 4.40 ERA) will be Baltimore’s starter Monday night. Lyles has yielded just one run in his last 13 innings.

Lefty Yusei Kikuchi (4-5, 4.86) gets the call for the Blue Jays for just his third appearance since missing most of July with an ailing neck. He’s 1-0 with 10 strikeouts and two walks in the two games since he has been back in action.

Kikuchi is 1-2 with a 5.29 ERA in three career starts against the Orioles.