Queer horror is having a moment. Well, technically, queer horror has been having its moment for 150 years. The lesbian vampire urtext Carmilla pre dates Dracula by a quarter of a century, after all. But that wink-wink nudge-nudge version of queerness that we’ve become so used to — think of those lingering glances between Brad Pitt and Antonio Banderas’ under-eyeliner in Interview with a Vampire — has been shoved down the stairs showgirls-style by a louder, brasher, and queerer version, all harnessed up and ready to take its place.

In a few weeks, Shudder’s four-part docuseries Queer for Fear will tackle that long thorny history head-on. But first, this very weekend sees the release of two explicitly queer horror films. Hitting Peacock is the conversion camp slasher They/Themwhile A24s Bodies Bodies Bodies drops us into the dangerous anything-goes habitat of the doped-up Zoomer while it storms straight (but not straight-straight) into a theater near you. That’s all fine and full of dandies, but there’s another gal in town worth a look-see. Her name is All About Evil.

Sure, she might be a little older, and her hair might be matted up with all sorts of questionable substances. She’s got some mileage on her. She has seen some shit. Lost in the theatrical shuffle of the financial crisis and released onto about 15 DVDs before vanishing from the face of the earth, she became a ghost in record time. But all of that is behind us now, because All About Evil has finally elbowed her way up from the grave after a decade of obscurity to claim her rightful place on the queer horror throne. The gruesomely hilarious (hilariously gruesome?) comedy-slasher from 2010 stars Natasha Lyonne and was directed by Joshua Grannell (aka, the legendary drag queen and horror host Peaches Christ). But age only adds sparkle to her tiara, if you ask me.

All About Evil was meant to get a theatrical, streaming, and physical release in 2020 for its proper 10th anniversary before, you know, 2020 happened. Now, this freaky film is finally getting the deluxe treatment a queen of this import and bearing deserves. Severin has unleashed a fancy Blu-ray release. Peaches Christ herself has been traveling coast to coast to showcase the film at festivals. Most importantly, this cutting comedy finally made its streaming debut on Shudder during Pride Month. And there it sits today, beckoning you to come gape and jape at its sordid and spectacular tale of one film nerd pushed too far. Far too far! We relate. 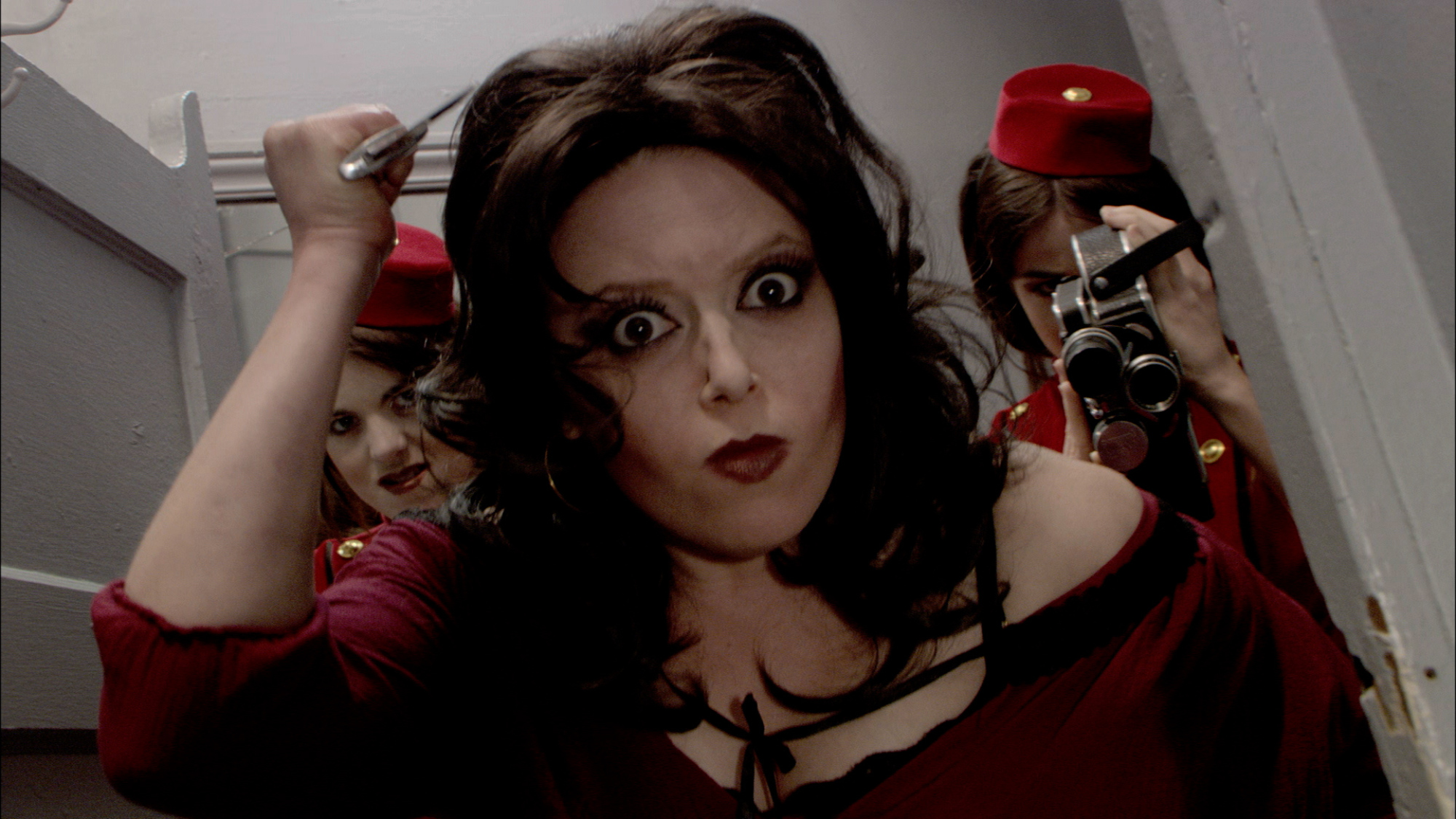 In All About Evil, Lyonne (ever the game one) plays Deborah (pronounced De-BORE-ahh), a mousy little thing, who hides behind an extra large soda pop while working at the counter of her father’s dilapidated movie theater in San Francisco’s Mission District. Deeply bonded over their shared love of horror films, Deborah takes her father’s sudden death hard. So hard that she begins slaughtering everyone in sight, starting with her own sneering mother.

It’s not just old-fashioned murder, though. With her crimes, Deborah creates art, staging each death Bucket-of-Blood-style. Only instead of encasing them in plaster like the Roger Corman movie did, she turns each homicide into a gruesome short film, which she screens before the night’s main feature. Picture those “don’t you dare use your cell phone” videos they run at the Alamo Drafthouse, but with breasts being lopped off in tiny little guillotines.

Owing as much of a debt to John Waters as it does to Roger Corman (not to mention exploitation queen Doris Wishman, who informed the character of Deborah), Grannell populates his film with a holy trinity of cult figures. Beside Lyonne (a cult goddess right out of the gate thanks to her legendary role as “Opal” on Pee Wee’s Playhouse), we have Dreamlander royalty Mink Stole playing Lyonne’s mouthy librarian friend. Cassandra Peterson — yes, Elvira! — appears in one of her rare non-Elvira roles, playing the mother of Lyonne’s sort-of love-interest Steven (Thomas Dekker), a fellow film nerd who’s nevertheless the straight man (wink-wink) to all of the larger-than -life characters surrounding him.

Drop all of these hams into a rundown theater full of wigs, cobwebs, and sharp objects, then shake thoroughly. What Grannell comes up with is truly one-of-a-kind – a cult movie ode to cult movies that wears its big gay heart (and the blood from several other hearts of every orientation under the rainbow) loud and proud on its big gay sleeve.

Surprisingly, Lyonne actually goes slightly less big than you might expect. But this choice gifts the film’s spiraling center some genuine pathos. Thus, there’s a sweetness that sticks to All About Evil, like so much popcorn scattered about the theater floor. As drag queens run up and down the aisles saving the day in the movie’s final mayhem-stuffed act, it’s nigh impossible not to see All About Evil as the passionately goofy (goofily passionate?) treatise for queer inclusion in the horror movie space that its makers intended. A space that feels, at long last, to be truly opening up.

All About Evil is now streaming on Shudder.