Nichols’ death was confirmed by Gilbert Bell, her talent manager and business partner of 15 years.

Nichols shared one of the first interracial kisses in television history on “Star Trek.” That moment, with her co-star William Shatner, was a courageous move on the part of her, “Star Trek” creator Gene Roddenberry and NBC considering the climate at the time, but the episode “Plato’s Stepchildren,” which aired in 1968, was written to give all involved an out: Uhura and Captain Kirk did not choose to kiss but were instead made to do so involuntarily by aliens with the ability to control the movements of humans. Nevertheless, it was a landmark moment.

There had been a couple of interracial kisses on American television before. A year earlier on “Movin’ With Nancy,” Sammy Davis Jr. kissed Nancy Sinatra on the cheek in what appeared to be a spontaneous gesture but was in fact carefully planned. The Uhura-Kirk kiss was likely the first televised white/African American lip-to-lip kiss. 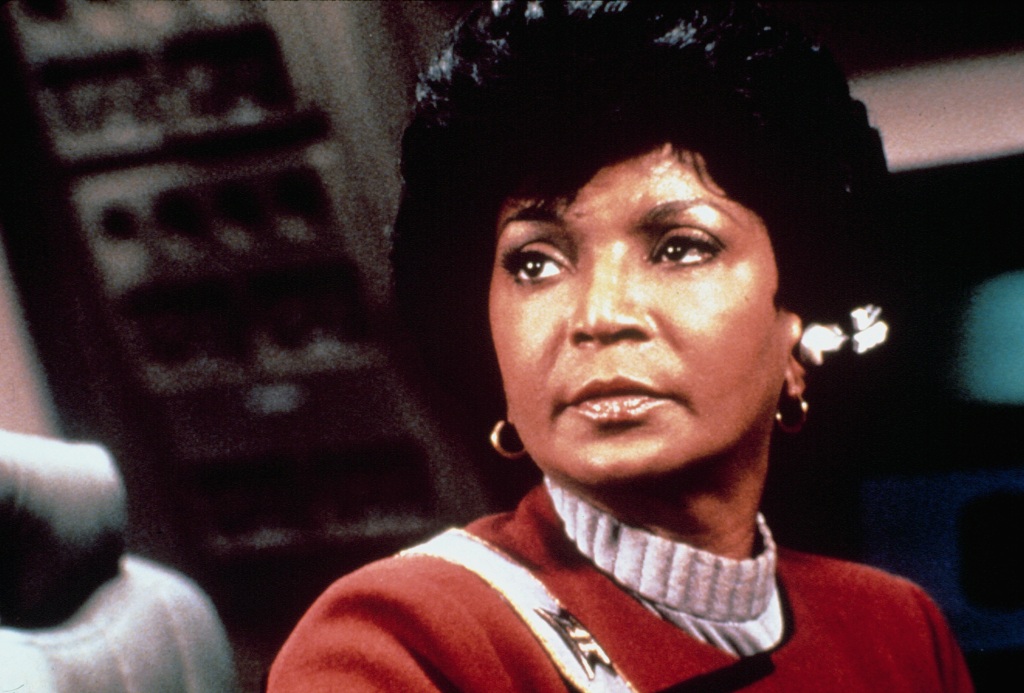 But Uhura, whose name comes from a Swahili word meaning “freedom,” was essential beyond the interracial kiss: A capable officer who could man other stations on the bridge when the need arose, she was one of the first African American women to be featured in a non-menial role on television.

Nichols mulled leaving “Star Trek” after the first season to pursue a career on Broadway, but the Rev. Martin Luther King Jr., who was a fan of the series and understood the importance of her character in opening doors for other African Americans on television, personally persuaded her to stay on the show, she told astrophysicist Neil deGrasse Tyson in an interview for the Archive of American Television.

Whoopi Goldberg, who later played Guinan on “Star Trek: The Next Generation,” has described Uhura as a role model, recalling that she was astounded and excited to see a black woman character on television who was not a maid.

Nichols and Shatner remembered the shooting of the famous kiss very differently. In “Star Trek Memories,” Shatner said NBC insisted that the actors’ lips never actually touch (though they appear to). But in Nichols’ 1994 autobiography “Beyond Uhura,” the actress insisted that the kiss was in fact real. Nervous about audience reaction, the network insisted that alternate takes be shot with and without a kiss, but Nichols and Shatner deliberately flubbed every one of the latter so NBC would be forced to air what appeared to be a kiss (whether their lips actually touched or not).

Both the “Star Trek” and “Movin’ With Nancy” moments drew some negative reactions, though Nichols recalled that the fan mail was overwhelmingly positive and supportive.

NASA later employed Nichols in an effort to encourage women and African Americans to become astronauts. NASA Astronaut Group 8, selected in 1978, included the first women and ethnic minorities to be recruited, including three who were Black. dr. Mae Jemison, the first Black woman to fly aboard the Space Shuttle, cited “Star Trek” as an influence in her decision to join the space agency.

Nichols remained a supporter of the space program for decades.

In 1991, Nichols became the first African American woman to have her handprints immortalized at the TCL Chinese Theater. The ceremony also included other members of the original “Star Trek” cast.

Born Grace Nichols in Robbins, Ill. on Dec. 28, 1932, Nichols began her show business career at age 16 singing with Duke Ellington in a ballet she created for one of his compositions. Later, she sang with his band.

Nichols also appeared in the role of Carmen for a Chicago stock company production of “Carmen Jones” and performed in a New York production of “Porgy and Bess,” making her feature debut in an uncredited role as a dancer in an adaptation of that work in 1959. (Later she would display her singing talents on occasion on “Star Trek.”)

While working in Chicago, Nichols was twice nominated for that city’s theatrical Sarah Siddons Award for best actress. The first came for “Kicks and Co.,” while the second was for her performance in Jean Genet’s “The Blacks.”

She had small roles in the films “Made in Paris,” “Mr. Buddwing” and the Sandra Dee vehicle “Doctor, You’ve Got to Be Kidding!” before she was cast on “Star Trek.”

During the early ’60s, before “Star Trek,” Nichols had an affair with Gene Roddenberry that lasted several years, according to her autobiography. The affair ended when Roddenberry realized he was in love with Majel Hudec, whom he married. When Roddenberry’s health was failing decades later, Nichols co-wrote a song for him, entitled “Gene,” that she sang at his funeral.

In January 1967, Nichols was featured on the cover of Ebony magazine, which published two feature articles on her within five years.

In the early ’70s, the actress made a few guest appearances on TV and appeared in the 1974 Blaxploitation film “Truck Turner” starring Isaac Hayes. She appeared in a supporting role in a 1983 TV adaptation of “Antony and Cleopatra” that also featured her “Star Trek” co-star Walter Koenig. She starred with Maxwell Caulfield and Talia Balsam in the 1986 horror sci-fi feature “The Supernaturals.”

Later, Nichols began to do voice work, lending her talent to the animated series “Gargoyles” and “Spider-Man.” She also voiced herself on “Futurama.”

The actress played the mother of Cuba Gooding Jr.’s lead character in 2002’s “Snow Dogs” and Miss Mable in the 2005 Ice Cube comedy “Are We There Yet?”

In 2007, Nichols recurred on the second season of the NBC drama “Heroes” as Nana Dawson, matriarch of a New Orleans family devastated by Hurricane Katrina who cares for her orphaned grandchildren and great-nephew, Micah Sanders (series regular Noah Gray-Cabey ). The following year she appeared in the films “Tru Loved” and “The Torturer.”

Nichols suffered a stroke in 2015 and was diagnosed with dementia in 2018, touching off a conservatorship dispute between her manager Bell and her son as well as a friend.

Nichols was married and divorced twice. She survived by her son, Kyle Johnson.