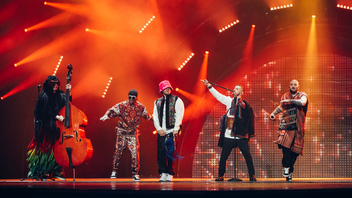 The social, economic, cultural and, of course, musical impact of the Eurovision Song Contest beyond the the live TV shows has been illustrated for the first time in a new report from our Media Intelligence Service.

The report goes on to showcase the economic impact of the 2022 event in Italy, with 57% of Turin’s tourists during the event weeks, coming solely for the Eurovision Song Contest, and over €702 million in advert revenue being generated by 119,000 online articles about the show.

Culturally, the Song Contest had a massive impact too. At the time of the report’s publication the 40 competing songs had been streamed over 544 million times. It’s also important to note that 40% of the 2022 entries featured a language other than English, with 16 different languages ​​being used in total.

This diversity was reflected in the Top 3 most streamed songs in the run up to the Contest (from January until the Grand Final):

Immediately after the Contest, a total of 6 Eurovision songs appeared on the ‘Billboard Global 200 (excluding US)’ chart:

Rosa Linn’s entry Snap also found success a number of months after the Contest thanks to its popularity on TikTok.

During the 2022 Grand Final, over half the possible viewers aged 15-24 were watching. This is 4 times higher than the channel average in primetime.

As well as capturing the elusive youth market, the Eurovision Song Contest continues to be popular across all age groups, with its balanced audience profile demonstrating that it remains relevant to all generations.

And, of course, the Eurovision Song Contest is fully celebrated online, across all our digital platforms these days, with YouTube continuing to provide a valuable companion to the shows, as well as extra content all year round.

More than 29 million unique viewers watched Eurovision Song Contest content on YouTube in the lead up to the event, with a further 33 million new viewers joining in during the event week (having not watched any 2022 content in the weeks prior).

The Contest continues to boom on other platforms too, with TikTok leading the pack.

While the music industry as a whole continues to be male dominated, the Eurovision Song Contest has a historical reputation for promoting female acts; between 1956 and 2022, the juries and the audience have overwhelmingly supported female talent as most of our winners were women.

This year, the gender ratio of artists was almost perfectly balanced: 17 were all female acts, 18 all male while the others were mixed groups or… genderless space wolves?

Some momentous and widely popular acts have contributed to boost LGBTQ+
acceptance across Europe; from Israeli singer Dana International (the first openly trans person to take part in the Contest) to Iceland’s 2022 participants Systur, who used their platform to raise awareness of trans issues.

The many LGBTQ+ acts and allies we see on stage every year, contribute towards the Eurovision Song Contest continuing to stand as a symbol of an open, tolerant and united Europe

So it’s good news all round for the world’s largest live music event! And with the ongoing development of the Canadian, Latin American and Asian Song Contests, the Eurovision brand and its impact looks set to grow and grow.