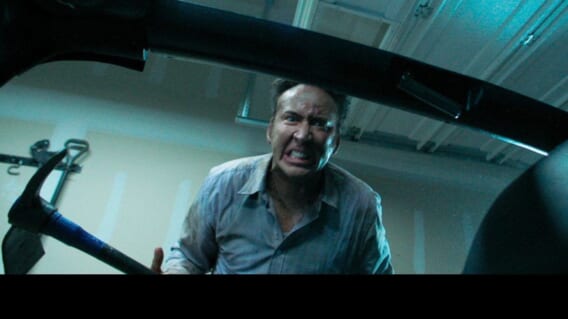 Welcome to The Overlook Motel, a place where under-seen and unappreciated films are given their moment in the spotlight. I hope you enjoy your stay here and find the accommodations to be suitable. Now, please take a seat and make yourself comfortable, I have some misbehaving guests to ‘correct’.

This week, I am looking back on Brian Taylor’s horror comedy, Mom and Dad. This delightfully dark effort is brutal, outrageous, and frequently hilarious.

Mom and Dad begins with a mysterious broadcast signal hitting the airwaves that alters the brain chemistry of parents around the world. No child is safe because the urge to protect has inexplicably been replaced with the urge to kill, by any means necessary.

Part of what makes Mom and Dad so effective is the way that it initially paints a very typical portrait of suburban life. On the surface, characters Brett (Nicolas Cage) and Kendall (Selma Blair) seem to have it all together. They have two kids and a two-story, single-family home. Like anyone, they have their fair share of problems. But they are, nevertheless, fairly ordinary. That’s demonstrated in painstaking detail throughout the first act. That setup serves as a brilliant contrast to the violent transition both Kendall and Brett ultimately undergo.

Related Post: Nicolas Cage Has a Suitably Crazy Pitch for Mom and Dad 2

I have not fathered any children. But I’ve long suspected many parents harbor certain resentments they don’t even dare fully admit to themselves. So, the way Mom and Dad tackles that notion head-on is more than just funny. It’s an over-the-top representation of what I believe a lot of parents probably feel deep down. I don’t mean that those of us that have procreated secretly want to kill our offspring. But I do imagine that many parents feel a certain sense of frustration towards their children for any number of reasons. And I can’t blame them. It would be almost unnatural not to feel that on occasion. The way the film handles that idea translates to hilarity. But that kernel of truth also serves to make the proceedings undeniably comical.

As things go off the rails and deep-seated resentments come to the surface, Cage is given the freedom to go full-on Nic Cage. Brian Taylor’s script and direction cater to the Oscar-winning actor’s skill set and allow him to chew scenery and get completely unhinged. But unlike some of the iconic actor’s lesser efforts, that reaction fits the narrative perfectly and the film is better for it.

Also Read: 5 Movies That Would Be Better With Nicolas Cage

It seems that Cage does his best work when collaborating with a director that knows when to restrain him and when to let him go completely off the rails. In fact, in a 2018 interview, Cage actually referenced Mom and Dad as his favorite movie he’s made in the latest ten years. And if you’ve seen the movie, it’s easy to see why. Taylor does a brilliant job of playing to Cage’s strengths and giving him room to do his thing.

Mom and Dad received a certain amount of critical acclaim upon its release. It even won the jury prize at the Molins Film Festival in 2017. Yet it still remains somewhat underseen by the masses. And that’s a real shame, seeing as Mom and Dad is one of the most colorful horror comedies of recent years, It manages to be equal parts funny, visceral, and bold. So, if you’ve passed this one over and you’re keen to check it out, the film is streaming via Starz as of the publication of this post. Additional watch options include DVD, Blu-ray, or digital rental.

If you’re a fan of under-seen cinema and are keen to chat more, you can find me on Twitter: @FunWithHorror.