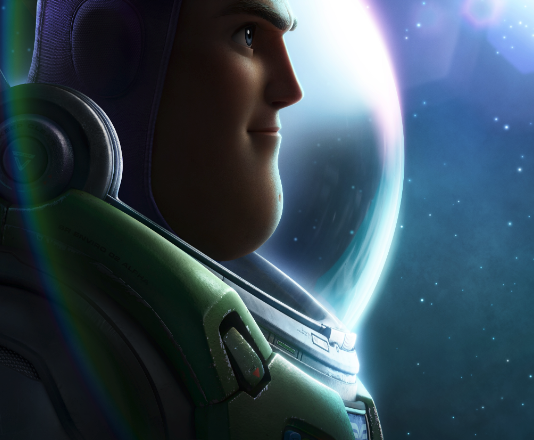 A title scrawl at the beginning of light year (PG), Disney-Pixar’s newest animated adventure, informs us that little Andy – the child who owned all those wonderful toys that inspired four films (and counting) in the Toy Story franchise – saw a movie in 1995 that fired his imagination and fueled his desire for a Buzz Lightyear toy doll. This is that movie.

As origin stories go, that’s quite a novel approach. It opens up all sorts of possibilities going forward: Will we soon see the TV Western that gave birth to Sheriff Woody? The spin-off that created Cowgirl Callie? The Jurassic adventure that brought us Rex?

I suppose those questions will be answered only by the box-office haul of this movie, which cost an out-of-this-world $200 million to make. But judging by the enduring popularity of this series, I’d expect to see Woody getting his turn as a solo star soon.

The movie that got Andy “buzzing” is something of a surprise. Director Angus MacLane, who also co-wrote the script, delivers a pretty solid sci-fi adventure that fits nicely alongside such classics of the genre as alien, Interstellar, Star Trek and Star Wars. There’s a cute talking robot cat named Sox, voiced by Peter Sohn, that keeps the movie kid friendly, but this is a cartoon that isn’t afraid to delve into weighty themes of time, space and human mortality, albeit in that clever, poignant and uniquely Pixar way.

Buzz, voiced by Captain America Chris Evans instead of Tim Allen, is a Space Ranger on a crew protecting a team of scientists traveling through deep space. They’re all in hyper-sleep when a distress signal from a passing system diverts them to an isolated planet inhabited by hostile life forms. When the ship attempts an emergency liftoff, Buzz is responsible for the gaffe that maroons them there indefinitely. He spends the rest of his life (or the best of it, anyway) trying to figure out a way to escape.

His repeated experiments traveling through hyper-space age him in increments of minutes, but all of his friends, including his best bud and fellow Ranger Alisha (Uzo Aduba), age years at a time. This progression is handled in a truly touching montage that echoes the great sequence in Up (2009) that captured a marriage and life together in a photo album.

When Buzz returns from his last time-space excursion, he discovers that the planet has been overrun by an army of militarized robots under the command of the evil Emperor Zurg (James Brolin), and Buzz decides that saving the colony is his last, best shot at redemption.

He’s assisted by a ragtag team of survivors that includes Izzy (Keke Palmer), the now-grown granddaughter of Alisha; and a couple of oddballs voiced by Taika Waititi and Dale Soules, whose blundering attempts at impromptu “Rangering” provide the slapstick that keeps Buzz hopping and the plot zipping along.

I must admit that I was skeptical going to see this movie with four granddaughters in tow. Ticket prices being what they are these days, light year looked like just another corporate money grab using an iconic character from a beloved movie series as bait.

But like the aforementioned Upthe bittersweet WALL-E (2008) and the touching Inside Out (2015), light year proves to be another unexpected Pixar gem. If it doesn’t take us fully “to infinity and beyond,” it at least explains why Andy was such a fan.

light year is currently in theaters only, but look for it to stream late this summer on Disney+.