Maverick flies flashingly in the skies grabbing sixth place with over $7 million. That’s comparable to “Frozen,” “Avitar,” “Titanic,” and Shakespeare in Love. Cruise’s wings could fly out of the stratosphere and remain in the lower portion of the Top Ten through August.

THIS WEEK* *Films with “wide” opening; not all of them in all regional cinemas.

“Dragon War Super” is a geek anime beholder. one critic writes, “It requires zero knowledge of the 2015 revival series Super. It’s a 99-minute nostalgic throwback to the original dragon ball and Dragon Ball Z anime. Even people who’ve never watched a Dragon Ball show only need to know this to enjoy the film: There are alien warriors who sometimes go looking for magic orbs that grant wishes. They scream a lot when they’re fighting. They sometimes change color when they get stronger.”

“Summering” has , so far, gotten mixed reviews. As an example, Variety stated: “Nostalgia may be the strongest emotion engendered by this breeze-blown dandelion seed of a film, which nods to the bittersweet complexities of growing up and confronting adulthood, but never gets as far as fully dramatizing them.”

Film Stage said the director did not trust his cast enough. It could have been special but comes in like a rainy summer day. Hollywood Reporter wrote it “had a potential for magic.”

AUGUST AT THE MOVIES FINISH

The Red Ribbon Army was once destroyed by Son Goku. Individuals who carry on its spirit have created the ultimate Androids, Gamma 1 and Gamma 2. These two Androids call themselves “Super Heroes.” They start attacking Piccolo and Gohan. What is the New Red Ribbon Army’s objective? In the face of approaching danger, it’s time to awaken – Super Hero! 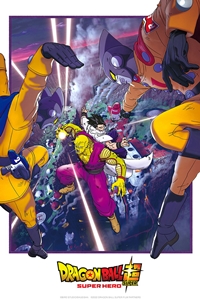 Laal Singh Chaddha, a simple man whose extraordinary journey will fill you with love, warmth & happiness. An official remake of Forrest Gump.


During their last days of summer and childhood—the weekend before middle school begins—four girls struggle with the harsh truths of growing up and embark on a mysterious adventure.

The blockbuster which launched the modern era of superhero movies, presented in 4K Digital. Christopher Reeve gives a star-making performance as the Man of Steel (“I’m here to fight for truth…justice, and the American way.”) Gene Hackman is the delightfully diabolical and supremely confident Lex Luthor.

BEAST (Aug. 19)
A father and his two teenage daughters find themselves hunted by a massive rogue lion intent on proving that the Savanna has but one apex predator.

SAMARITAN (Aug. 26) A young boy learns that a superhero who was thought to have gone missing after an epic battle twenty years ago may in fact still be around. THE INVITATION

After the death of her mother and having no other known relatives, Evie (Nathalie Emmanuel) takes a DNA test…and discovers a long-lost cousin she never knew she had. Invited by her newfound family to a lavish wedding in the English countryside, she’s at first seduced by the sexy aristocrat host but is soon thrust into a nightmare of survival as she uncovers twisted secrets in her family’s history and unsettling intentions behind their sinful generosity.