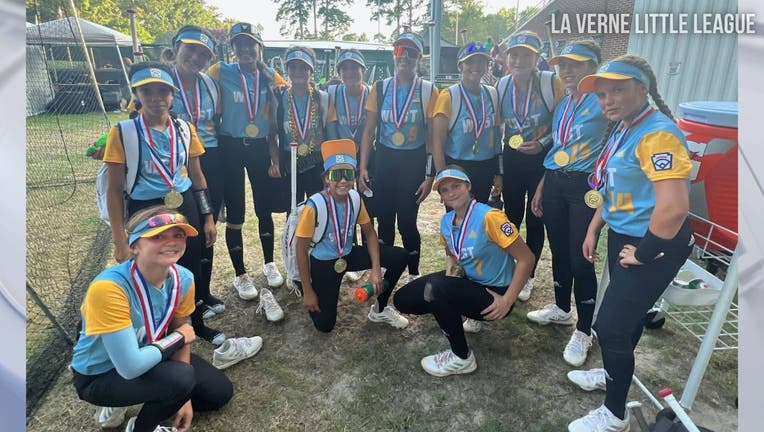 The all-star team from the La Verne Little League avoided elimination in the Little League Softball World Series Thursday, scoring six runs in the sixth and final inning to break a tie in a 7-1 victory over its counterpart from the Issaquah Little League of Issaquah, Washington.

Friday’s game will be streamed on ESPN+.

Issaquah, the Northwest Region champion, opened the scoring in the bottom of the first when Hadlie Delucchi tripled with two outs and scored on a throwing error by Colburn, the La Verne right fielder.

Coldiron limited Issaquah to two hits for the remainder of the game, a third-inning single by Shaelyn Erickson and a sixth-inning single by Giorgia Graham. She struck out four and walked three.

After Erickson retired each of the first nine La Verne batters, the West Region champion tied the score in the top of the fourth.

Laila Washington led off with a single. With one out and Torres at the plate, Washington stole second, advanced to third on a passed ball two pitches later and scored on the next pitch when Torres hit a line drive that went off the glove of first baseman Shaina Starnicky for a single.

La Verne was relegated to the elimination bracket in the modified double-elimination tournament after losing 6-1 Wednesday to the all-star team from the Chesterfield Little League of Chesterfield, Virginia, the Southeast Region champion.

La Verne is attempting to become the fourth team from Los Angeles County to win the World Series, and the first since 1990 when the all-star team from the Foothill Little League in Glendale won. Los Angeles County’s other two champions were also from Glendale.

The tournament is set to conclude Monday.