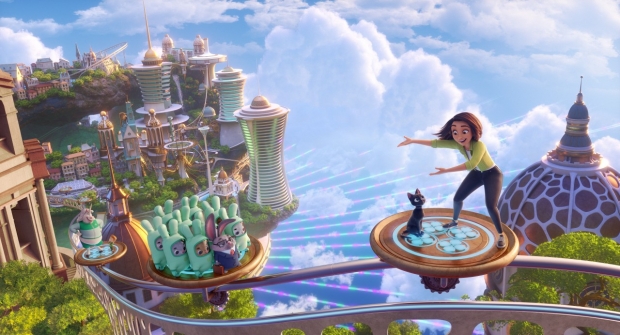 There are a great many captivating sequences in Apple Original Films and Skydance Animation’s 3D animated comedy, luck, from the penny polishing carousel to the shamrock vortex leading down illuminated and sparkling tubes connected to The Land of Luck. It’s a wild ride to be sure, but, for director of animation Yuriko Senoo, it was the sequences that adopted a “less is more” policy that took her breath away.

“We did a lot of research and we looked at a lot of references of great comedians, like Lucille Ball, Carol Burnett, Charlie Chaplin, Buster Keaton, and Donald O’Connor, because their physical comedy is so great,” explains Senoo, known for her animation supervisor work on Skydance’s previous pride and joy, their short film blush. “They’re great storytellers because they make us laugh without saying anything, just with their faces and bodies. And we were also drawn to their deadpan comedy. So we have applied the ‘less is more’ concept in our animation to create more comedy.”

luck is Skydance’s first animated feature, directed by The Pirate Fairy and Secret of the Wings Tinkerbell film director Peggy Holmes and produced by former Pixar leader and Toy Story writer/director John Lasseter. Now streaming on Apple TV+, luck centers on Sam Greenfield, who is considered to be–by herself and close friends–the unluckiest person in the world. Now 18 years old, Sam is aging out of foster care and despite having numerous anxieties about adjusting to life alone in the real world, is most nervous about leaving behind her five-year-old bunkmate Hazel.

When Sam is accidentally led to the fantastical Land of Luck by a rather self-centered black cat named Bob, this famously unlucky lass sees this as her chance to snag some luck for Hazel in hopes that it might help her young friend find her forever home .

“I was fortunate to have Peggy reach out to me for animation help,” says Senoo. “I know her movies to be charming and heartwarming, so I jumped at the opportunity. There was no doubt that this movie is going to be great and fun to work on.”

But the fun was quickly followed by challenges, as the entire story of luck is filled with incredibly intricate actions, all woven together by more actions of good luck or bad luck. For example, in one of the film’s earliest sequences, Sam starts getting ready two full hours before she needs to arrive at her new job. While at first this might seem excessive, we soon realize how necessary this is.

As Sam rushes into the bathroom, she closes the door and knocks over a broom in the process, which lands on the doorknob, locking Sam inside. Later, while trying to make herself breakfast, Sam opens up the cabinet, reaches inside and accidentally knocks over a bread loaf and food jar. She catches both, but knocks over another jar in the process, which lands on a plate that’s holding her toast and jam and the toast launches across the room and gets stuck on a wall. It’s one thing after another.

“We had to show bad luck, but we didn’t want to make the characters look like they’re just being clumsy,” explains Senoo. “So we had to create cause and effect where every action has a reaction that leads to another action. In one scene in the Land of Bad Luck, there’s a goblin that falls into the cement mixer. He happens to step onto a rake that hits him in the face, sending him backward, and then causing him to trip on this toolbox on the floor and then falls into the cement mixer.” 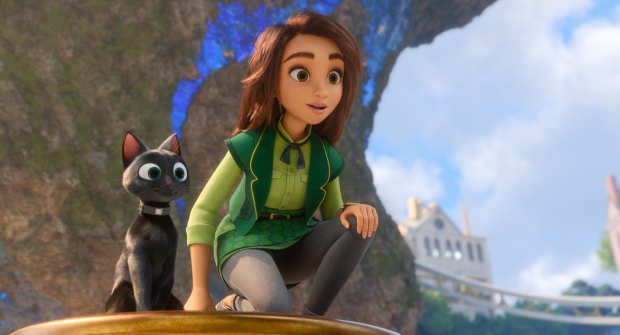 And the same special attention was paid to the sequences of good luck comedy.

One of Senoo’s favorite sequences is when Sam is chasing down the magical, talking cat Bob who she believes to be in possession of a real lucky penny. Bob, knowing that humans are not supposed to know about the Land of Luck, tries to lose Sam in the crowd, walking on umbrellas that just happen to open up for him at the right time, and hitching a ride on a truck that happens to pass by right when Bob needs to make a quick getaway.

“In the lucky land, everything lines up exactly right,” says production designer Fred Warter, who previously served as art director for rumble. “As characters are traveling through the world, a stairway will show up or a ramp will show up right as you step off of a precipice. That kind of thing. And so everything had to be really planned out. That was really challenging. And it was a lot of working back and forth with the 3D artists, just to make sure that every physical movement had a kind of poetry to it.”

For Warter, the story’s brand of humor is not only inspired by history’s most famous comedians, but also the genius nature of silent films.

“luck is a very visual film,” says Warter. “It’s one of those films where I think you could turn off the sound and know what’s going on. Physical humor is hard to pull off. I think the animators did a really good job.”

Senoo adds, “It’s fun to lay out the rhythm of the sequence. These great comedians we referenced, they know how to do great action scenes, but they also know when to pause for comedy. That’s why the movement is so rhythmic. So we tried to apply this ‘action, action, and then pause,’ formula, leaning into the silence as if to let the characters say, ‘What the heck just happened?’” 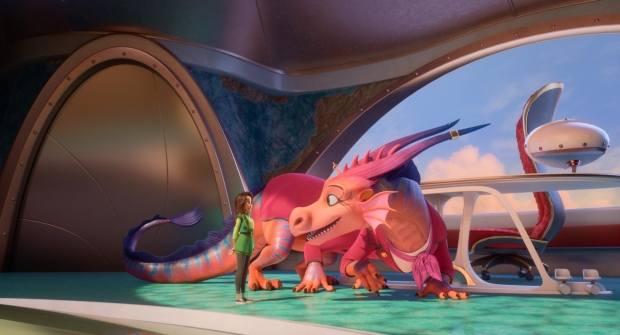 But the film’s animated comedy is for more than just entertainment. It’s also meant to highlight the emotional durability of the characters who experience bad luck.

“The charm is that those bad luck characters, they’re not grumpy or upset about it,” says Senoo. “They have a really good sense of humor about their bad luck. I think they actually like to fix things. The buildings are in constant repair, but they don’t mind. They enjoy their work and they make it work.”

Warter adds, “They constantly have to create workarounds to get through the world. That just highlights their plucky nature. They don’t take bad luck lying down. They really embrace the bad luck and try to fix it.”

This is especially true of the film’s leading lady, Sam, whose movements were modeled after Senoo’s own daughter.

“My daughter’s about the same age as Sam,” explains Senoo. “She’s just graduated high school, moving on to college and living on her own for the first time. I actually used her as a reference for Sam’s acting. She was one of my inspirations. It made the project very special.”

Senoo and Warter hope the special nature of luck highlights the power of visual storytelling and the timeless effectiveness of silent, sometimes slow-moving slapstick.

“It’s one of those things where you want to do something that’s never been seen before,” says Warter. “That’s really hard to do, but I think we created something that’s pretty unique. I hope people are inspired and entertained.”

Victoria Davis is a full-time, freelance journalist and part-time Otaku with an affinity for all things anime. She’s reported on numerous stories from activist news to entertainment. Find more about her work at victoriadavisdepiction.com.