There’s a moment in “Day Shift,” a new vampire action movie on Netflix, that might be easy to miss, but for those paying attention, speaks directly to a moment happening in cinematography right now that’s changing how films are made.

It happens during a high-speed car chase in which Jamie Foxx’s beleaguered San Fernando Valley vampire slayer is trying to elude various baddies. It’s a zippy sequence for sure (the director is JJ Perry, a former second-unit director and stuntman who worked alongside the creators of “John Wick”), but what really set me off (I wounded and watched it again) is when the camera is launched from inside one of the cars, traveling through the sunroof and, still in motion, continuing to capture the action. It’s a small flourish but a truly incredible one that embodies not just how Hollywood is changing the way modern action movies look, but also how they feel.

“In this business, everything’s been done already,” Perry told TheWrap. “And it’s trying to find a way to do things a little different, captured in a different way.”

Drone photography — or attaching a camera to a drone to capture certain shots on film — isn’t necessarily new. It used to be that drone shots were a cheaper, nimbler substitute for helicopter shots, which is how they have been used (or is it overused?) in documentary features for years. You can see this in things like 2017’s firefighter thriller “Only the Brave,” with the camera glacially tracking the firefighters at the center of the story. (Cinematographer Claudio Miranda had a pilot’s license and operated his own drones for the movie.) The shot that finishes the “Mission: Impossible – Dead Reckoning, Part One” trailer, of Tom Cruise launching himself off of a dirt bike, was partially captured by a drone, as revealed in behind-the-scenes footage at CinemaCon earlier this year.

In 2018, Time film critic Stephanie Zacharek wrote a somewhat academic piece about how drones are “revolutionizing the way film and television is made,” but her examples of how drones were being utilized were, quite frankly, boring — an overhead shot above a yacht in “Wolf of Wall Street,” a dinosaur swooping towards performers in “Jurassic World” (the shot meant to “mimic the movement of the flying reptiles”), an episode of “Black Mirror” where the drone shot stood in for… a menacing drone. 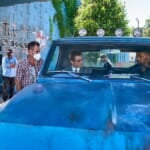 All of these shots could have been captured with a techno-crane or a jib or a helicopter. What this latest crop of action movies does is create shots that could have only been accomplished with a drone, and that aren’t ashamed of their inherent droniness.

2022: The year that drones broke through

2022 is definitely the year that the use of drones has transcended the establishing shot/helicopter shot aesthetic, becoming more formally adventurous and (dare we say it?) artistic. Recently, filmmakers have used the drones to their full potential, aggressively propelling them into (and through) the action in new and bewildering ways.

First there was Michael Bay’s “Ambulance,” released this spring, which pushed the limits of drone photography. Starring Jake Gyllenhaal and Yahya Abdul-Mateen II as bank robbers who hijack an ambulance and turn it into an escape vehicle, the drone footage heightened the already over-the-top action. It utilized FPV (first-person view) drones, piloted by drone-racing champions wearing VR headsets that allow them to see exactly what the drone sees, in real time. Bay had the drones racing up the side of buildings, dodging in and out of shootouts and racing alongside the out-of-control ambulance. He even put them inside, zooming through the corridors of a bank or through an underground parking garage.

Then there was Joe and Anthony Russo’s Netflix action extravaganza “The Gray Man.” A high-concept spy thriller starring Ryan Gosling and Chris Evans, the drone shots are notable for their versatility — there are some that simply zoom through a location, say, but there are more that do head-spinning stuff like following a character from outside inside. (This is notable from the opening action sequence.)

“We wanted the project to have a dynamic, kinetic energy. We wanted it to be controlled chaos. The exercise of the movie was a relentless action film that from the first frame to the last frame is breathlessly caught up in everything that is going on. We needed the camerawork to reflect that,” Joe Russo explained.

Both Russo brothers wanted to push the limits in terms of what their audience could handle, as well. “It’s inarguable that our attention spans are dwindling. Our ability to process information is exponentially better than it was even five years ago,” Joe Russo said. “We like to play around on the cutting edge of what we think your brain can handle.”

Joe Russo said that their longtime camera operator introduced them to something called the speed drone. This, as it turns out, is how they were able to accomplish the shots of a drone following behind a character or zooming from the outside to the inside. “It’s very light and can travel up to 60-70 miles an hour. If it hits an actor, it won’t cause pain or damage,” Joe Russo said. “You can actually use them in very close proximity to actors and send them through very tight spaces.” 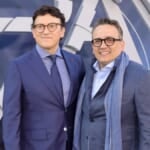 For the Russos, the drones also spoke to the genre they were playing with. “The language of these films, because they’re a travelogue, you’re moving from location to location around the world. You have to establish those locations. There’s only so many ways you can do that,” Joe Russo said. There’s the slow, creeping style of David Fincher and Christopher Nolan or the more “spectacular” awe-inducing wide shot of Steven Spielberg, Russo said. “To stay in the language of the movie we thought we’d try to develop a new, more kinetic way to bring you from location to location,” Joe Russo said. And for that, they turned to drones.

And, indeed, “Day Shift” is the latest movie in 2022 to benefit from dynamic drone shots, mostly by throwing one out of a sunroof.

Every so often an action movie will introduce an element that becomes instantly replicated throughout popular culture; from a single film an entire aesthetic blossoms. Just think about “The Matrix,” which back in 1999 introduced Eastern influences to Western audiences – everything from John Woo-inspired gunplay to the wirework of Hong Kong martial arts choreographer Yuen Woo-ping. (Would “Crouching Tiger, Hidden Dragon,” also overseen by Yuen Woo-ping, have been so widely embraced a year later without “The Matrix” priming the pump?)

The last time the action genre felt a seismic stylistic shift was with “The Bourne Identity” films’ use of the shaky-cam aesthetic. While it was introduced in the original film by Doug Liman, it was refined and amplified by Paul Greengrass, who directed the second, third and (after a lone spin-off) fourth installments.

Greengrass turned action filmmaking into a kind of cubist experiment. Most of the movies that followed in Greengrass’ footsteps simply borrowed the chaotic camerawork and quick editorial rhythms, without thinking about why those elements were so effective in “Bourne” in the first place. Still, you could feel the influence everywhere – even the new James Bond movies, while spectacular, were still indebted. 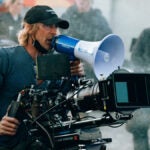 Perry sees a similar aesthetic shift occurring with the use of drones.

“It will change the way that car chases are filmed the way that when the Russian arm camera crane came 22 years ago, it changed,” Perry said. He said to look at the way “Smokey and the Bandit” was filmed compared to “Fast and the Furious.” It’ll be that kind of leap. “It’s like, when we get a new tool or a new toy or a new technology, you almost have to know what to do with it when it lands because it’s going to grow exponentially. Every six months, it’s going to change and get better. It’s kind of just getting in front of that right away,” Perry said.

And drones are not just for wild, out-of-control camera movements or stately overhead shots. It’s also allowing for filmmakers to make their films with more flexibility. David Leitch, who directed the Brad Pitt action-comedy “Bullet Train” and whose production company made “Day Shift,” told me that drones were utilized on “Bullet Train” because the movie was filmed during the pandemic and they couldn’t physically get to Tokyo, where the movie is set. Their workaround was having a drone operator film plates in Tokyo, with real-time feedback and choreography from Leitch and cinematographer Jonathan Sela. “We were on WhatsApp and Zoom,” Leitch said.

Perry used drones in a similar fashion for “Day Shift.” While the movie takes place in the San Fernando Valley, most of the movie was shot in Atlanta. They just had eleven days in Los Angeles. With drones, it allowed him to make the most of the short amount of time.

Clearly, given that drones can fly just about anywhere, their next application is pretty obvious: the superhero movie.

Towards the end of my chat with Perry, it took out his cell phone. He said the drone work they had accomplished on “Day Shift” was a “prototype” for what they were able to do now. He showed me a scene from a major upcoming superhero movie that he was working on. It was magnificent, clearly built on what he and Bay had done this year but more fluid, zippier, more thrilling, even if I was watching a cell phone over a Zoom video call. “They’ll animate this superhero flying in the foreground,” Perry said. Pointing me to where the character would eventually appear.

And just like that, I could see the future of action cinema. 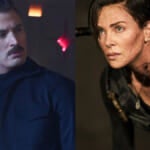