Bunny, Allu Arjun’s nickname, was given to him on April 8, 1982. His uncle Chiranjeevi is one of the most well-known performers in the Telugu film industry, and his father, Allu Aravind, is a well-known producer. He is also Padmashree Allu Ramalingaiah’s grandson, the late comedian. He is renowned as a fashionable star for his distinctive acting and dancing styles. Additionally, he is renowned for altering his body and hair for each movie he performs. His five film roles to date have all been blockbusters. Allu Arjun is a renowned actor, but he also gives back to his community and serves as a positive role model. Every year on April 8, the day of his birthday, he gives blood and participates in events for young people with physical and mental disabilities.

Yash, who was born on January 8, 1986, began his acting career in theatre. He made his television debut with the highly successful Kannada program Nanda Gokula and went on to work in a number of other TV programs. He made his big-screen debut with Moginna Manasu and starred in a number of smash movies, including Mr. and mrs. Ramachari, Googly, Raja Huli, and Gajakesari.

Rocking Star Yash attained PAN India celebrity status and became a household name throughout India thanks to the enormous success of KGF chapter 1, which was released in 2018 in five languages. The movie was the most streamed movie on an OTT platform in 2019 and earned over INR 250 crores.

The most anticipated movie in Indian cinema, KGF Chapter 2, featured superstar Yash. KGF 2’s trailer had received more views than any other Indian trailer in history, and the movie raised the bar for Indian cinema.

Didn’t we all fall in love with Pushpa’s feelings for Srivalli? Allu Arjun, also known as Pushpa, is just as romantic in real life as he is in the movie. In 2011, the actor wed Sneha Reddy, and since then, they’ve been the power couple in the business. Allu Arjun frequently posts unposed photos of himself and his wife with sweet captions.

Ram Charan, a star of RRR, is also a hopelessly romantic person. The actor and his wife, Upasana Kamineni, are genuinely, madly, and completely in love.

Yash, a KGF star, first with Radhika Pandit on the show’s set. They even appeared in the movie Moggina Manasu later on. As history would have it, they fell in love. They got hitched in 2016 and now have two children.

The love story starring Mahesh Babu and Namrata Shirodkar is regarded as the best in South Indian cinema. They have been together for more than ten years and are still one of the most romantic couples in town.

Nayanthara and Vignesh Shivan exchanged vows in a magnificent ceremony. The director went above and beyond to make the diva feel special. Vignesh frequently publishes numerous mushy posts on social media. 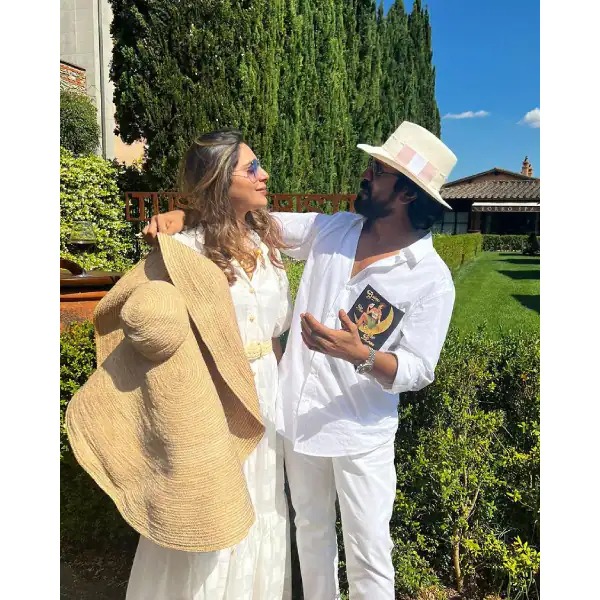