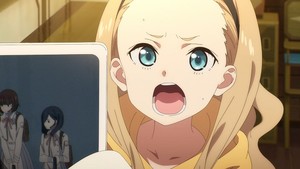 Lycoris Recoil‘s habit of dropping incidental nuggets of lore among the cutesy casual conversations between its leads can be a prime distraction at times. Partway through this episode, after we’ve watched Chisato breezily deal with some intruders into the safe-house she and Takina are cohabitating, she offhandedly mentions “LilyBell”, supposedly a boy version of the Lycoris, before she and the episode’s plot just move un. You can’t just throw something like that out there and then not do something with it sooner rather than later, Lycoris Recoil! So now I’m going to be on the lookout for antics from snappily-dressed schoolboy assassins as I’m also keeping up with all the interconnected background agendas and wondering when Mizuki will get her own dedicated episode, while the show instead insists on the main feature of watching Chisato and Takina play rock-paper-scissors to decide who does house chores.

That said, we’re also six episodes in, so I think we’ve settled into that as the Lycoris Recoil experience. And this episode actually does have more going on than its frontloaded premise of our lead adorable assassins suddenly living together. In fact, apart from that rock-paper-scissors bit – which is mostly there to frame and facilitate the series’ now-staple episode-ending payoff gag – Takina’s third-date move-in with Chisato is itself kind of a background component of this episode’s real overall plot. I hope you like Robota and Majima, because they’re front-and-center in this one, taking us on a whirlwind catch-up of the storyline components concerning their hunt for the DA, the Alan Institute’s backing and machinations regarding Robota, and Majima’s pursuit of the Lycoris informing something of a breakdown in his personality. It is…uneven, to say the least. Several chunks of the episode are spent on Robota’s futile efforts to find information or subcontract hacking efforts that go nowhere, as details of that overarching story are alluded to by all these other authority figures commenting on the goings-on.

There are some coalesced components to appreciate, like how that arms-deal bust from the first episode is still key to all this, as well as bringing back Kurumi’s hacking of the DA which was instrumental in arranging for that event to kick this whole ongoing plot off. Seeing as I’ve been hoping the show would find more for Kurumi to do, this should be a boon; she ends up having to cop to her data intrusion being at least partially responsible for informing the group that’s been taking out Lycoris lately, including Chisato’s own near-defeat this week. But the episode is so caught up in focusing on Robota and Majima to explain and advance the actual plot, even in the shadow of Kurumi’s previous successes, that the cute little Walnut doesn’t actually get to do much in what should be her own redemptive re-entry. Kurumi still gets some great bits courtesy of Lycoris Recoil‘s typically effective antics, like her adorable screaming stumble out to explain the relevance of some earlier info she hacked, or her sick direct drone-strike maneuver to reroute a rocket launcher, because even the hackers in this show are incapable of subtlety. But unlike Chisato and Takina’s revelatory rapport, Kurumi lacks anyone she consistently, directly bounces off of, meaning any characterization that could result from that is limited for her. I feel like they kind of want to have her do that with Mizuki, but we just haven’t gotten that many chances to see it.

But when all the more jumbled, uneven story elements do come together by the end, this episode ends up working as well as Lycoris Recoil usually does. Heck, it even shows off some new sides, putting Chisato in what feels like actual danger for once, which properly sells the value of her gun-toting gal-pal having to come to her rescue. As the show is wont to do, it also intersects with those seemingly silly aside gags: Chisato’s bullet-dodging powers let her be comically over-competent at Rock-Paper-Scissors, but it also provides an explanation that she can be beaten in the properly orchestrated circumstances. It’s all a way to reveal a vulnerability in her which could necessitate that ever-increasing closeness with Takina. It’s no surprise that works, since the characterization comprising that relationship has always been the part this series makes look easy, which is why it’s frustrating it can’t maintain that same successful energy when it’s frontloading labyrinthine hacker-sponsorship plots and accelerating Majima’s transformation into the Joker.

It definitely feels like this episode illustrates the pratfalls of Lycoris Recoil trying too hard to commit to its overarching plot. I sure because to see more long-form story engagement to help this show feel more complete by the time it completes its course. And stuff like those episode-ending punchlines illustrates that the series has an understanding of the value of closing those kinds of narrative and structural loops. But this entry’s efforts at contributing to its ongoing narrative simply don’t feel as tight, thematically or presentationally, as the more one-off stories we got in the past couple of weeks. It still looks plenty cool and has fun moments (love Chisato defenestrating some intruders only to annoyedly remark that not only would she have to replace her windows now, but this has apparently happened before), but the way all this stuff is crammed in feels messy, and some elements, like Kurumi’s nominal focus, wind up feeling shortchanged. As with that distracting aside mention of a boy version of the Lycoris, I can appreciate the show’s enthusiasm in throwing all these details out there, but recognize that it might do better to focus and direct its strengths more efficiently.

Chris is a freewheeling Fresno-based freelancer with a love for anime and a shelf full of too many Transformers. He can be found spending way too much time on his Twitterand irregularly updating his blog.