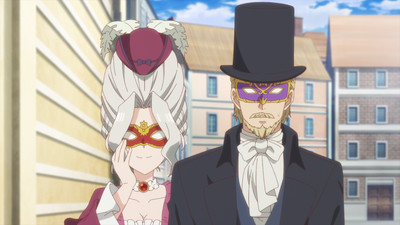 Another week, another episode of Parallel World Pharmacy that shows us how this anime is one of the secret MVPs of the entire summer season. Now that Farma has gotten his new independent pharmacy up and running in the city, our boy has to figure out how to actually convince folks to come in and do business, especially the common folks. The whole pharmaceutical angle meant that PWP has made for some excellent medicinally-inclined edutainment in the past, and now that Farma is a young and enterprising business owner, the show can also dig in its heels and really go nuts by teaching us all about history, chemistry, the scientific method, and the complex world of marketing product and developing entirely new industries in a burgeoning industrial capitalist society, all at the same time!

Wait, don’t run! It’s nowhere near as dry and boring as it sounds! I did mention that this show is really fun and wholesome, right?

What really makes an episode like “Daily Life at Parallel World Pharmacy and Cosmetics” work is how earnest its characters are, and how genuinely good-natured the show has turned out to be. In lesser hands, this whole story would feel like a thinly-veiled excuse for the author to find a place to fit all of the factoids they learned during a TED Talk binge into a single script, since almost every single conversation that any of the characters have is directly related to interrogating some new aspect of Farma’s nascent business operations. We start with trying to figure out how to market a new and strange mode of pharmaceutical operation to the common people, until we eventually switch gears into exploring the common medical issues afflicting the people of a society that is operating roughly within what we would consider their Industrial Era, specifically the women. Once we learn about all of the lead-based beauty products and the bloodletting that women are resorting to in order to keep up with the world’s beauty standards, Farma then sets about introducing more modern skin care and makeup products, which eventually leads to him inadvertently becoming a key player in a completely transformed cosmetics industry. Did I mention the lengthy post-credits sequence that makes sure to explore the need for strict and fair market regulation in a functioning free economy, since the wealthy are at a disproportionate advantage and could easily monopolize the means of production and the methods of distributions, which of course leads to—

Dammit, I’m doing it again, aren’t I? Please, stop trying to pretend that your best friend is calling you with an “emergency” at work that you have to go deal with. I promise, Parallel World Pharmacy makes all of this interesting!

Like I said, the show is earnest as hell, so it finds ways to fit all of this information into its story while still being quite entertaining and charming. Lotte is the one who takes it upon herself to survey the commoners about the elements of Farma’s business, for one, so hopefully our hero can recognize the new Executive Head of Marketing and Public Relations when he sees it. It’s also Farma’s mother who opens his eyes to the cosmetics issues that the women of the kingdom are dealing with, and his new patient Chloe is the one who uses her own family’s wealth to start up the cosmetics branch of Parallel World Pharmacy Inc. The whole affair doesn’t just give all of the side characters little moments to shine, it also allows Farma to be a believably flawed protagonist, even as he is single-handedly transforming entire industries after a couple of weeks’ of honest work.

Sure, the kid has that magical aptitude that so many fictional doctors have where he just so happens to be an expert in every medical field all at once, but you know what he isn’t an expert in? economics. The poor kid can barely wrap his head around the basic principles of supply and demand without Chloe and the Queen’s help, and he even has to be reminded that selling at rock-bottom prices is an easy ticket to a crashed market. Maybe it’s a good thing that he’s not more of a cutthroat capitalist, though, since one of his best qualities is his completely humane approach to running a business. Hell, not only did he give a small army of women Pharmaceutists a second shot at their careers after they are blacklisted by other contract providers for having kids, I’m pretty damn sure that he’s the first person in this society to come up with the concept of paid maternity leave.

So yeah, leave it to Parallel World Pharmacy for me to be chomping at the bit for more lectures about the need for socially conscious regulation from a strong central government that prevents the wealthy from unilaterally controlling the forces of commerce. And if those lectures continue to be delivered by some of the Best Girls (and Tiny Doctor Boys) of the season? Just plug that biz straight into my veins, please and thank you.

James is a writer with many thoughts and feelings about anime and other pop-culture, which can also be found on Twitterhis blog, and his podcast.