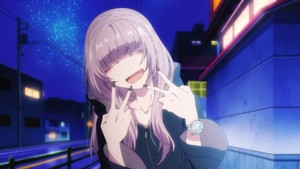 First off, it’s nice to see Nazuna in her own element sans Ko. It helps establish her as her own person, not just a young boy’s nightly companion in light debauchery. It also provides an opportunity for Call of the Night to be wry and take jabs at its own premise. Nazuna is introduced singing the night’s praises, but here she is loafing around, complaining about TV programming, and otherwise being bored. She is, in other words, just like me for real. Or to put it a less meme-rich way, the pull of the night relies on the social in addition to the mental and the temporal. Beyond the obvious limits set by her undeadness, Nazuna is not actually an innate nightfly. She relies on the spark of interpersonal connection to ignite her nocturnal engine. Freedom, after all, is always best enjoyed with company.

If I’m going to sing the series’ praises for filling out Nazuna’s personality, then I’m also obligated to point out how many closeups of her thighs we see throughout the episode. The anime does not obfuscate that it expects the audience to be attracted to Nazuna, and while many shots can be justified as coming from Ko’s POV, it still doesn’t change the fact that fan service is an integral, intended part of the appeal. I roll my eyes at the brazenness of some of it, but I also give a very solemn and chaste nod to the more unique particulars of its gaze. I love, for instance, the emphasis on Nazuna’s nails. The sharp goth claws are a defining part of her character design, and they’re a good vehicle for the danger-tinged eroticism of vampire romances. For my money, the hottest scene this week is Nazuna tracing her nails over Ko’s skin and pressure points as foreplay for her bloodsucking. That fusion of pleasure and pain, as Ko notes earlier, is the essence of sex. That’s true intimacy, and Call of the Night is at its best when the camera can capture that sense of vulnerability and excitement shared between partners.

However, this is still a lot for Ko to process. The presentation of his conflicted feelings, while far from novel territory for these romance-tinged coming-of-age stories, benefits from his earnestness. He’s neither too mawkish nor too aloof. He’s definitely brooding, but so is every other boy of fourteen years, and unlike many of them, he’s invested in actually working through and resolving those feelings. That’s not to say certain stories about teenage malaise are worse for their aimlessness—that can be a valid and accurate way to explore adolescence. In Ko’s case, though, the emotional hook of Call of the Night lies in his end goal of embracing the transgressions of vampirism and his intermediate goal of learning how to love, and also in how those desires weave in and out of Nazuna’s spiritual wanderlust. And on the simpler end of things, he’s worried about romantic attraction potentially ruining the friendship he and Nazuna currently enjoy. That’s totally relatable! Granted, he and Nazuna share more neck-mouth proximity than I have with any of my closest friends, but I remember wrestling with those feelings back when I was a dumb teen too.

Overall, the vibes are good this week. I like Nazuna’s little reality check about how inconvenient her lack of a reflection is. This is hardly the first vampire story to poke fun at that, but Sora Amamiya‘s deadpan delivery turns it into a cute little aside. The love hotel scene, meanwhile, is another fun example of Nazuna gleefully exploiting Ko’s naivete in order to gently torment him. Akin to the similar scene from this year’s My Dress Up Darling, it’s a powerful instance of advanced girlfriend warfare. And the overtness of Nazuna’s sensual massage prolongs Call of the Night‘s divorce from good taste, but it’s nothing that should surprise anybody still watching it. And I appreciate that, beneath the nurse outfit and gratuitous waist straddling, this is only a prelude to Nazuna throwing some manual labor at Ko’s bewildered feet. Like all good supervisors, she knows how to delegate the grunt work.

Call of the Night has been, for lack of a better word, vamping on the same lackadaisical mood for a while now, but I still find myself eager to return to its shady escapades. It’s like a chill late-night snack with a hint of bitter melancholy and a big bite of spicy teasing. Yeah, maybe you won’t want to make a regular meal out of it. As a weekly treat, though? It’s devilishly delicious.

Call of the Night is currently streaming on HIDIVE.

Steve’s Twitter DMs are open to vampires and vampires only. Otherwise, catch him chatting about trash and treasure alike on This Week in Anime.