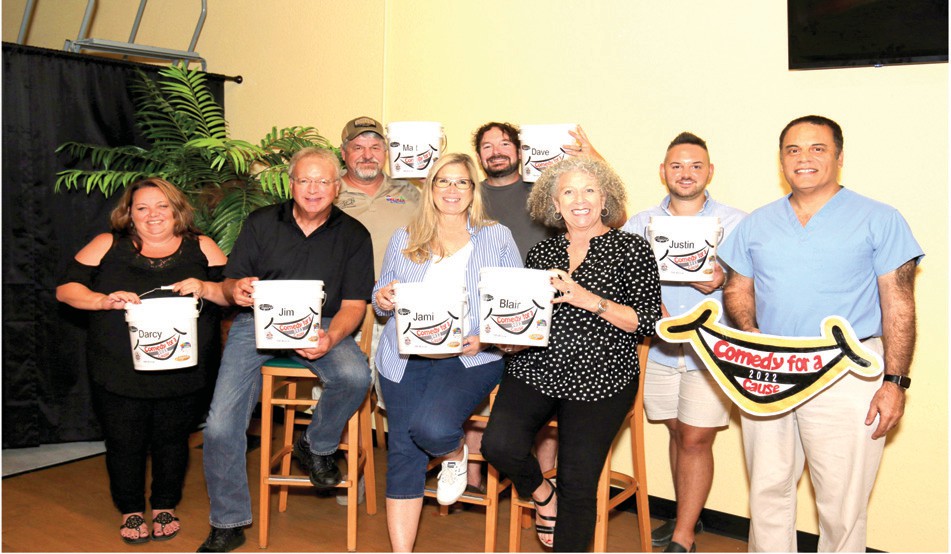 Returning for its 10th year, Charlotte Players’ “Comedy for a Cause” — fashioned in the manner of the show “Who’s Line is it Anyway?” — will provide its audience with 90 minutes of improvisational skits while the cast raises money and wins awards for their performances. All donations to the performers benefit Charlotte Players, the Charlotte County Imagination Library, and Kids Onstage.

Charlotte Players introduced this year’s cast of “Comedy for a Cause” during a reveal party earlier this month at Beef O’Bradys in Punta Gorda. Executive producer and master of ceremonies Steve Lineberry, of Premiere Photographic Events, introduced the performing local business and community leaders:

Charlotte County Commissioner Dr. Chris Constance is directing for his eighth year. He has been part of “Comedy for a Cause” since its beginnings a decade ago.

“I was a performer the first two years, then became director the third year and ever since,” said Dr. constance. “It’s great fun watching performers with little or no stage experience mature and improve during our rehearsals. It’s a guilty pleasure for me, but the real benefit of our time and effort is for Charlotte Players, the Imagination Library and the kids.”

Charlotte Players will be holding its third annual “Curtain Call” online auction that coincides with “Comedy for a Cause.”

“We expect to have over 100 items or trip offerings this year,” said Sherrie

Moody, the organization’s executive director. “The auction will start at 6 pm on Sept. 1 and end at 8:30 pm the night of the event.”

“Comedy for a Cause” will be held Friday, Sept. 9, at the Charlotte Harbor Event & Conference Center, 75 Taylor St., Punta Gorda. Doors open at 6 pm for VIP ticket holders, and 7:15 pm for show-only ticket holders. VIP tickets, which include dinner are $90, while tickets for the show only are $30. Tickets can be purchased by contacting Charlotte Players at 941- 255-1022 or through the website (www.charlotteplayers.org). Donations can be made directly with any cast member or by visiting the Charlotte Players website and clicking on the event link. Total donations made to each cast member will determine this year’s People’s Choice Award winner.