Was it really just 10 months ago that there existed the tantalizing possibility of the Boston Red Sox playing the Atlanta Braves in the World Series?

Had the Red Sox not faded in their ALCS showdown against the Astros last October, losing Games 5 and 6, it would have happened. But the Sox did fade, and then the National League champion Braves took out the Stros in the World Series.

And that’s why Atlanta’s baseball club, which was established in Boston in 1871 before relocating to Milwaukee in 1953, will take the field as defending World Series champions Tuesday night in the opener of a two-game, interleague series against the Red Sox.

(Fun fact: It’ll be the first time the Braves franchise has played in Boston as defending World Series champions since Oct. 7, 1915. After the so-called “Miracle Braves” won the 1914 World Series, they dipped to second place in the NL in 1915, closing out the season with a 15-8 loss to the New York Giants at the newly-built Braves Field.)

We can agree last year’s Red Sox were overachievers, with next to nobody predicting they’d make it as far as Game 6 of the ALCS. And yet, it has to be jarring for Boston baseball fans to see the powerful Braves making another playoff run while the Red Sox stumble further into disarray.

The Braves are in second place in the NL East, but that’s only because the first-place Mets are enjoying an all-cylinders-a-blazin’ season, from the 1-2 mound punch of now healthy starters Jacob deGrom and Max Scherzer to the MVP candidacy of power-hitting first baseman Pete Alonso. But the Braves are still 64-46 and lead the NL in home runs; they will be a formidable opponent in the postseason. 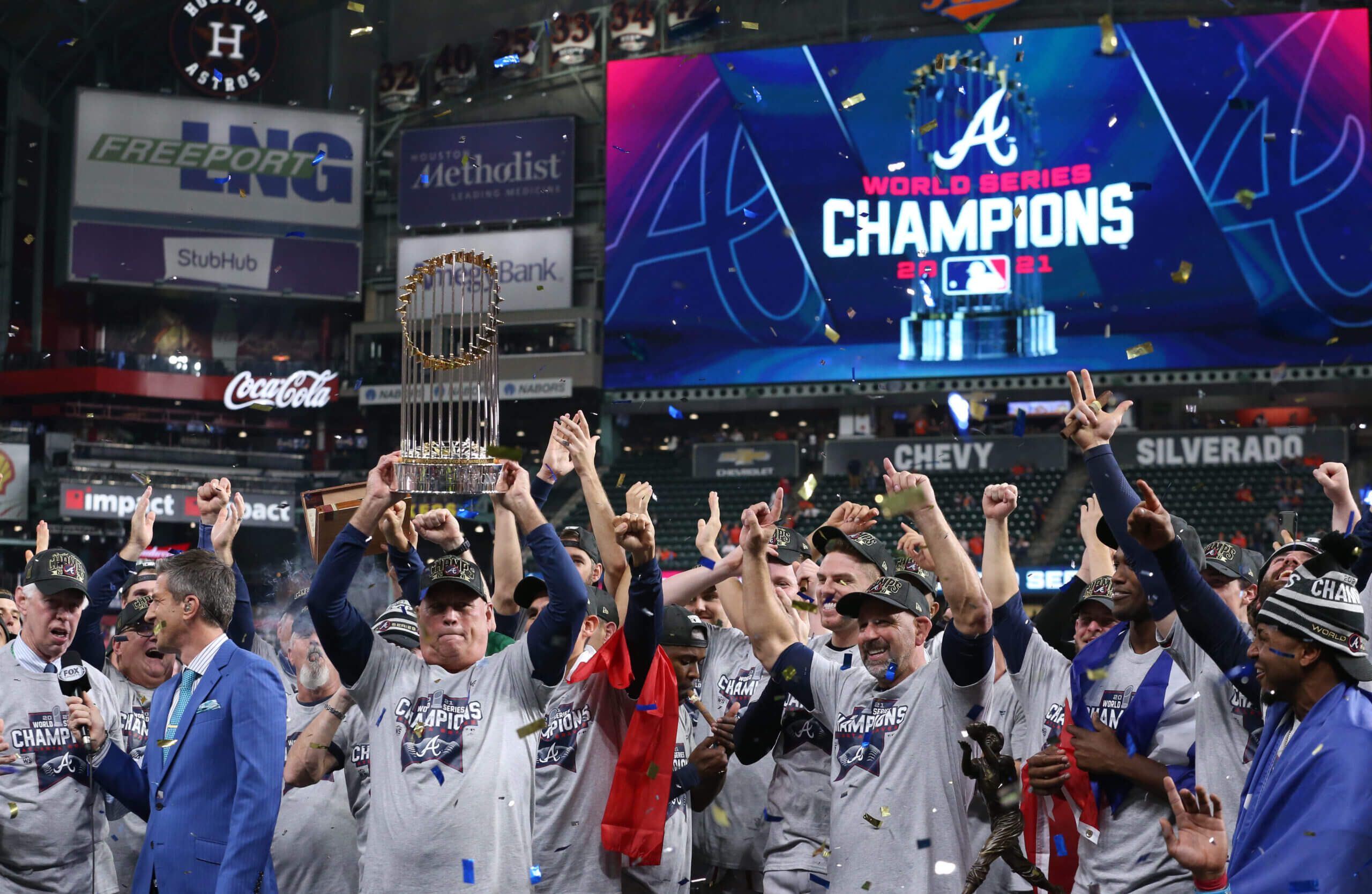 With a few different bounces, it could have been the Red Sox — not the Astros — battling the Braves in the 2021 World Series. (Troy Taormina / USA Today)

I’m the first to concede that a Red Sox-Braves rivalry has never materialized, despite the Braves’ Boston roots. And for obvious reasons: Only a smattering of Boston Braves fans are left, and most of them were toddlers when the Hub’s National League ball club moved out of town.

Just to pick one such fan, New England Patriots owner Robert Kraft was a passionate follower of the Boston Braves as a child, as his family’s apartment in Brookline was only a few blocks from Braves Field. Kraft is 81 years old. On the day the Braves announced they were moving to Milwaukee — March 13, 1953 — Kraft was 11. Though he still keeps Boston Braves trinkets in his desk drawer and has often said his passion for the team guided him to his ultimate decision to keep the Patriots in New England, there are not many of his kind around anymore.

But, yes, the storylines would have been magnificent had the Braves and Red Sox met in the 2021 World Series. For openers, it could have happened way back in 1948, had not the Red Sox lost a one-game playoff to the Cleveland Indians for the American League pennant. Cleveland went on to win the World Series — it hasn’t won another since — against the Boston Braves.

And while former All-Star catcher Del Crandall was the last living Boston Brave when he died in 2021, the Boston Braves Historical Society reports there are at least five still-living players who signed with the team but didn’t play for them in the big league. One of them is Walpole, Mass., native Joe Morgan, who signed with the Boston Braves in 1952 and made his big-league debut with the Milwaukee Braves in 1959. He would later be the Red Sox’s manager from 1988 to 1991.

(And if you want to move the goalposts about 70 yards to connect with an Atlanta angle, it’s been said that Morgan, playing for the Triple-A Jacksonville Suns in 1965, hit the first home run by a lefty batter at brand new Atlanta Fulton County Stadium. The Triple-A Atlanta Crackers played one season in the stadium before the big-league Braves arrived in 1966.)

Given all Morgan’s history with the Braves, might he have quietly rooted for them last year in a Red Sox-Braves World Series? Or would he have remained loyal to the Red Sox, the team that gave him a break as a big-league manager?

“Hard to say, since it didn’t happen,” Morgan said. “The Braves do mean a lot to me, but the Red Sox are still here. Guess that’s the direction I’d go in.”

Sure would have been fun to see Morgan, who turned 91 last November, tooling around on the field in the run-up to a Braves-Red Sox World Series.

But even if there’s not much of a rivalry between the two teams, that doesn’t mean a visit to Fenway Park by the defending World Series champions won’t be fun. Losing longtime first baseman Freddie Freeman to the Dodgers turned out to be a mess, but, lordy, look at this team. Dansby Swanson. Austin Riley. Matt Olson. Max Fried. And on it goes. It’s a team worth watching.

Chaim Bloom, the embattled chief baseball officer of the Red Sox, didn’t sell off everybody in pursuit of a rebuild. But nor did he make daring acquisitions designed to power the Red Sox into the wild-card lead. The result was a curious hodgepodge of somewhere-in-the-middle deals that makes the Red Sox look less like a team and more like a drawer of mismatched socks.

Preposterously, the leading newsmaker on the Red Sox the past couple of months has not been third baseman Rafael Devers or shortstop Xander Bogaerts, both of them All-Star players and holdovers from Boston’s 2018 championship club.

Instead, it’s Jarren Duran, the soon-to-be 26-year-old outfielder who has played 76 games over two seasons. He’s hitting .227 this season and has been a defensive calamity in center field, and yet he feels emboldened to speak words that shouldn’t be escaping the mouth of a player with such a shaky resume.

After losing a fly ball for an inside-the-park grand slam a couple of weeks ago, he sniped to sportswriters, “Until you guys catch a fly ball in twilight, let me know.”

On Aug. 1, after going 2-for-4 with a home run and three RBIs in a 3-2 Red Sox victory over the Astros, he went on ESPN’s SportsCenter and said, “You know, the outside noise, we don’t care. double us. That’s all we need to know is that you guys are doubting us, everybody’s doubting us, and then when it happens, don’t be cheering for us when you’ve been you’ve been doubting us the whole time.”

And then came Sunday’s effort in Kansas City in which Duran apparently lost a ball in the sun and then couldn’t hold onto a ball hit to deep right-center. He also jawed with fans in the bleachers at Kauffman Stadium, explaining after the game he was upset because bottle caps were being thrown in his direction.

Red Sox manager Alex Cora defended Duran for losing the ball in the sun. The manager also said he wasn’t aware Duran was arguing with fans.

If the Red Sox are committed to Duran being their center fielder of the future, they have a funny way of showing it. They need to work with him on his defense and his hitting, but they also need to work with him on his mouth. The Red Sox are in no position to be having any player, let alone a .227 hitter who can’t catch the ball, lecturing fans about not being allowed to cheer if the team climbs back into contention.

But, hey, the Atlanta Braves are in town. If their storied past isn’t enough to get you out to Fenway Park, maybe their sterling present will do the trick.