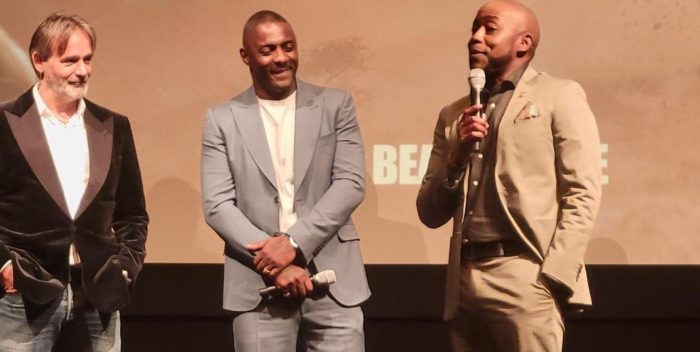 “Beast” is coming from Universal next Friday, August 19th with a big roar. Last night the studio threw a big time splashy premiere screening the movie at the Museum of Modern Art and then a swinging dinner at Nobu 57 complete with a deejay and dancing. It was almost like old times.

“Beast” is kind of a horror thriller set in South Africa directed by Baltasar Kormákur with pulse-racing CGI lions, Idris Elba showing off his talents as a major leading man, Sharlto Copley turning in his best performance since “District Nine,” and phenomenal cinematography from Philippe Rousselot, and a screenplay by Ryan Engle that brings depth and humor to what could have been a simple set up. Universal has a hit, I think: the audience loved it with a capital L.

Most interesting person at Nobu goes to Will Packer, who produced — or survived — this year’s Oscars including the three hosts and the world-shattering Will Smith slap of Chris Rock. Packer is already a popular Hollywood figure. He emceed last night’s party and proved to be a gregarious host. And no one slapped him!

Would he produce the Oscars again, I asked? “Never!” he cried. “It’s really a job for someone at the end of their career, who’s not busy with a regular schedule. It takes so much work!”

“Beast,” about a rogue lion who’s lost his mind– yes, there is such a thing, at least in this movie — comes from an idea from writer and producer Jamie Primack Sullivan. She pitched it, and before you could say Simba the idea was green-lit. Among her next movies? “I have a Judd Apatow project. I can’t discuss it yet, but it’s female-led.” So stay tuned…