James Moser curated this story by Lauren Shaw, which The Appalachian published Oct. 2, 1984.

dr. Al Corum, head of the experimental program, conducted a trial viewing with students from Watauga College. The students were asked to watch a videotape called “The Blues and the Pinks,” which was broadcast over the AppalNet channels.

Two thirds of the group viewed the program on the TV sets in their residence hall rooms. The other third watched it on a TV set installed in a classroom.

At the end of the broadcast the students assembled to answer some general questions on their understanding of the program’s content and concepts.

The result of the test should determine whether the students in the classroom took a more serious approach to the broadcast than did their counterparts who viewed the program from their rooms, Corum said.

The experiment was designed to test the system’s effectiveness as an educational tool. Some faculty members fear that students’ attitude towards television could defeat AppalNet’s purpose. dr. Lesley Gerber, an associate professor of interdisciplinary studies, hopes that the experiment will prove whether or not “the atmosphere of the entertainment which surrounds TV will smother it [AppalNet’s purpose].” 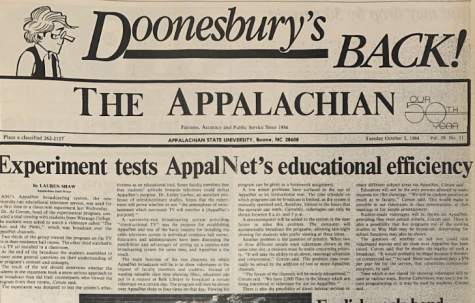 A university-run broadcasting system providing “constructional TV” was the purpose for establishing AppalNet and one of the basic reasons for installing the cable television system in individual residence hall rooms. Educators and administrators have been discussing the possibilities and advantages of setting up a campus-wide broadcasting system for some time, and AppalNet is the result.

The main function of the two channels on which AppalNet broadcasts will be is to show videotapes at the request of faculty members and students. Instead of wasting valuable class time showing films, educators can put in a request at Belk Library to broadcast a certain videotape on a certain day. The program will then be shown over AppalNet three or four times on that day. Viewing the program can be given as a homework assignment.

A few minor problems have surfaced in the use of AppalNet as an instructional tool. The time schedule on which programs can be broadcast is limited, as the system is manually operated and, therefore, limited to the hours that the operator can work. Currently, videotapes can only be shown between 8 am and 5 pm

A microcomputer will be added to the system in the near future to solve this problem. The computer will automatically broadcast the programs, allowing late-night showing for students who prefer viewing at these times.

Another problem is the question of priority. When two or three different people want videotapes shown in the same time slot, a decision must be made concerning priority. “It will take the ability to sit down, rearrange schedules and compromise,” Corum said. This problem may eventually be solved by the addition of two or more AppalNet channels.

“The forum of the channels will be mostly educational,” Corum said. “We have 2,000 films in the library which are being transferred to videotape for use on AppalNet.”

There is also the possibility of direct tutorial services in many different subject areas via AppalNet, Corum said.

Educators will not be the only persons allowed to make requests for film showings. “We will be student-sensitive as much as to faculty,” Corum said. This would make it possible to use videotapes in class presentations, at club meetings or for simple entertainment.

Student-made videotapes will be shown on AppalNet, providing they meet certain criteria, Corum said. There is also a possibility that live programs out of the existing studios in Wey Hall may be broadcast. Advertising for school functions may also be shown.

The question of whether or not one could rent videotaped movies and air them over AppalNet has been raised. Corum said that he doubts the legality of such a broadcast. “It would probably be illegal because it borders on commercial use,” he said. Since each student pays a $70 per year fee for the service, that constitutes commercial purposes, he said.

Time which is not slated for showing videotapes will be used in various ways. Boone Cablevision may use it for its own programming or it may be used by students, Corum said.