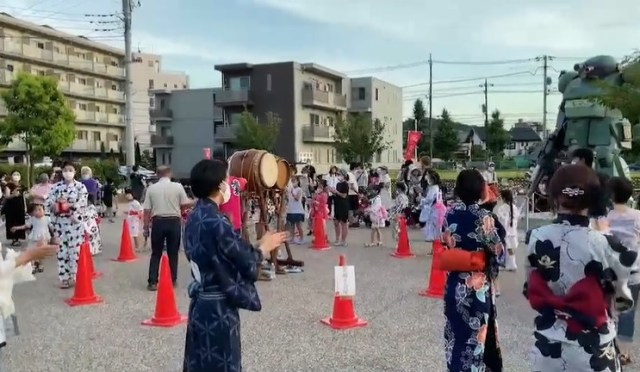 At the end of July, the Higashi Naganuma neighborhood of Inagi City in Tokyo held its annual summer festival. As is often the case at these local community celebrations, the main event was the good odorior bon dance.

Bon odori is a group dance in which participants move in a circle while swaying their arms in a relaxed but joyous manner, accompanied by the sound of taiko drums and traditional folk songs. At the start of the below video from Twitter user and local resident @macha780Higashi Naganuma’s bon odori looks like any of a hundred other towns’…

…until the camera swings around and we see a full-size anime robot watching the festivities!

Of course, if you’re a mecha connoisseur with a taste for the classics, you probably expected that particular robot to be nearby, because the song playing at this part of the bon dance is “Hi no Sadame” (“Destiny of Flames”), the opening theme of 1983 TV anime Armored Trooper Votomsand the robot is a full-scale recreation of the series’ ATM-09-ST Scopedog.

Of course, this all just begs the question of why Inagi has a Scopedog statue, and the reason is that it’s the hometown of Votoms mecha designer Kunio Okawarawho still lives in the area and is something of a goodwill ambassador for the city (Okawara was also the mecha designer for dozens of other anime, including the original Mobile Suit Gundam and a slew of its sequels and spin-offs).

The Scopedog statue was erected in March of 2020, and stands in a plaza outside Inagi-Naganuma Station on the JR Nambu Line, not far from Tachikawa. At 3.8 meters (12.5 feet) tall, anime scholars could debate whether the Scopedog qualifies as a full-status mecha or if it should be considered a powered armor instead. There’s considerably less room for debate, though, on whether or not the statue is awesome, as evidenced by the unanimous nature of Twitter comments on @macha780’s videos such as:

“Such a beautiful scene.”
“Best bon dance ever. The taiko drum really does it for me.”
“Watching the video makes me want to dance too!”
“Man, I wish I lived in this town.”
“Definitely going to go to Higashi Naganuma’s bon dance next year!”

That last sentient was echoed by several other commenters, with @macha780 replying to them all to let them know they’re more than welcome to visit the neighborhood whenever they like. And even for those who were at this year’s dance…

…as of August 1, the Scopedog has been given a temporary makeover to its “Red Shoulder” version, which it will have until October 31, so now everyone has a reason to stop by again.