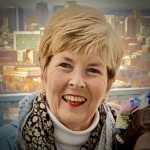 Beloved Mama and Mamie, Amy Elizabeth Floyd Moss passed away peacefully on August 6, 2022, in her 76th year, with her loving family by her side. Throughout her battle with ovarian cancer, she always had a smile or kind word to share. Her health never compromised her ability to live each day to the fullest, and she was an inspiration to all who knew her. She always held her friends and family close to her heart.

She had the uncanny ability to make the best of any circumstance and was determined to serve others with a smile on her face. There was always an extra seat at her dining table for those who needed a hot meal, a warm hug or both. If you are reading this, you were most likely invited to join her family for Thanksgiving at the Farm.

Amy was born on May 5, 1946, in Brownsville, TN to her parents Emily Gaffron and Roy Floyd. She graduated from Haywood High School in 1964 where she was homecoming queen and Miss HHS. She went on to earn a speech pathology degree in 1968 at Southern Methodist University where she was a president of Kappa Kappa Gamma Sorority and homecoming queen. Here she met the love of her life, George West Moss Jr. of Natchez, MS, whom she married in June of 1968. They went on to have three amazing children, George III, Philip, and Emily. George and Amy moved to Auburn for George to complete his veterinary medicine training at Auburn University while Amy completed a masters in speech pathology. After graduation, George opened a vet clinic in Arab, AL and Amy taught while they raised their children alongside sweet friends who became precious family to them.

In 1983, they made Brownsville their forever home. The family moved into the house that Amy’s grandfather, Daddy Doctor, designed and built, to care for him in his final years. Amy had a strong network of friends—she introduced her famous poppyseed chicken to Brownsville—and was active in the Eighth Review Club and several bridge clubs. Amy was a member of the First United Methodist Church and was very involved in Bible studies, Sunday School, and Emmaus. She also saw her career as a mission field, and she worked as a speech pathologist in various school systems in West Tennessee until she retired.

Amy’s faith and devotion to her family were her greatest loves in life. She will be missed by so many friends and family who cherish Amy’s example of sacrificial love and service to all. To God be the glory.