Ever since Christine Sajecki realized that the red flakes her six-year-old was picking up on the ground were lead paint – falling from the television tower that looms over her Woodberry neighborhood – she has been on a mission to alert her neighbors about their potential danger.

Sajecki plastered the area with homemade signs that warn residents not to touch the little red bits, tell them how to request clean-up and offer links to where they can learn more about the health hazards of lead.

But as she worked her way through the North Baltimore community, noticing the bits of red paint still visible on lawns and in gutters, she was horrified to find that many people were still unaware of the issue.

A couple she encountered with a baby, who knew nothing of the danger of the paint chips lying on the sidewalk outside their home, left her particularly disturbed.

“The outreach has been really bad,” said Sajecki, faulting both the Maryland Department of the Environment and Television Tower Inc. (TTI), the joint venture comprised of the three television stations that own the more than 900-foot-tall broadcast tower.

Inadequate outreach has likewise been a major concern for the Woodberry Community Association in the wake of the incident, in which workers hired to re-paint the tower started powerwashing it, but failed to trap the bits of paint they dislodged.

“It has really fallen to the residents and neighbors to spread the word, and that’s just not right,” said Jessica Meyer, the association’s president, who sent a list of demands to MDE and TTI, including better outreach to landlords and other property owners and the posting of warning signs.

A company was hired by TTI to pick up or vacuum away the paint, but Meyer and Sajecki say they are doing an inadequate job, with new flakes continuously washing into the community, especially after it rains.

Asked who could help them get the word out more widely, community leaders say that one obvious candidate would be the tower owners themselves – WJZ, WBAL and WMAL.

“They have social media. They have viewers on the news,” she pointed out. “They could do it.” 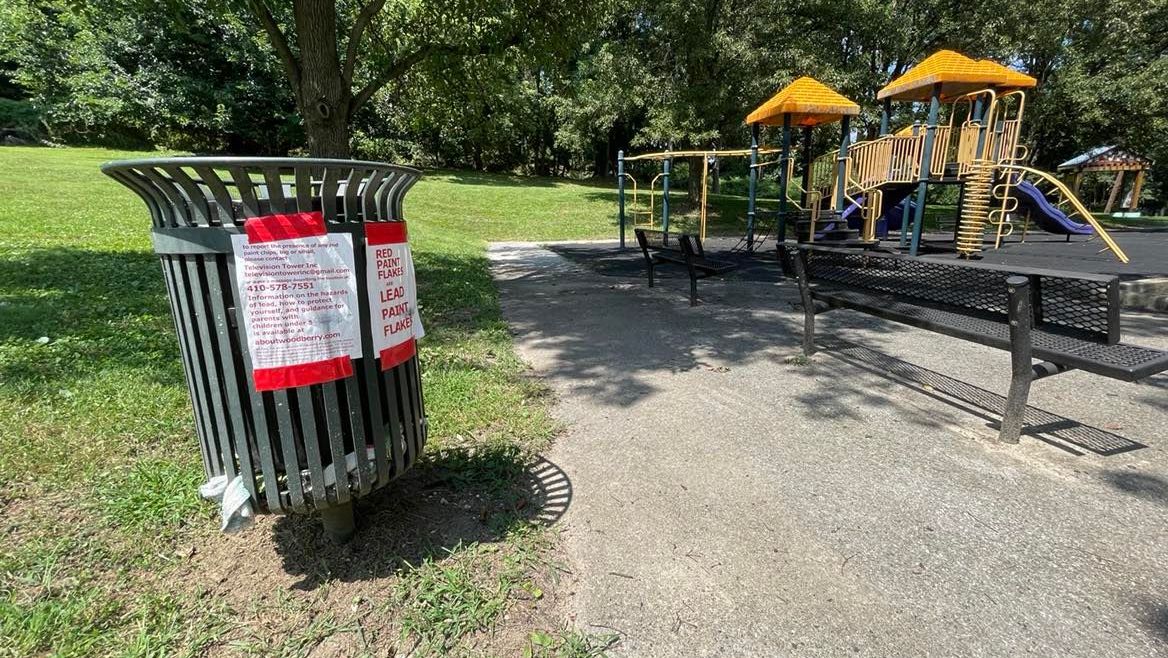 A homemade lead paint chip warning sign on a trash can at the Rockrose playground. (Fern Shen)

So far, it appears none of the TV stations has mentioned the issue on their news broadcasts.

Why not cover a health hazard originating from a structure they use to broadcast to hundreds of thousands of viewers each day?

The iconic candelabra tower is located at the top of “TV Hill” squarely between the WJZ and WBAL studios.

“These are TV stations. Their job is communication” – Jessica Meyer, president of the Woodberry Community Association.

Have any of the stations done a report on the falling paint flakes? If not, why not? We asked these questions via emails to the station representatives who attended a July 12 community meeting:

None so far has replied.

At the meeting, according to published minutes, Hooper told attendees that the Nebraska company that did the work on the tower, Skyline Tower Painting Inc., “thought the lead was already abated.” 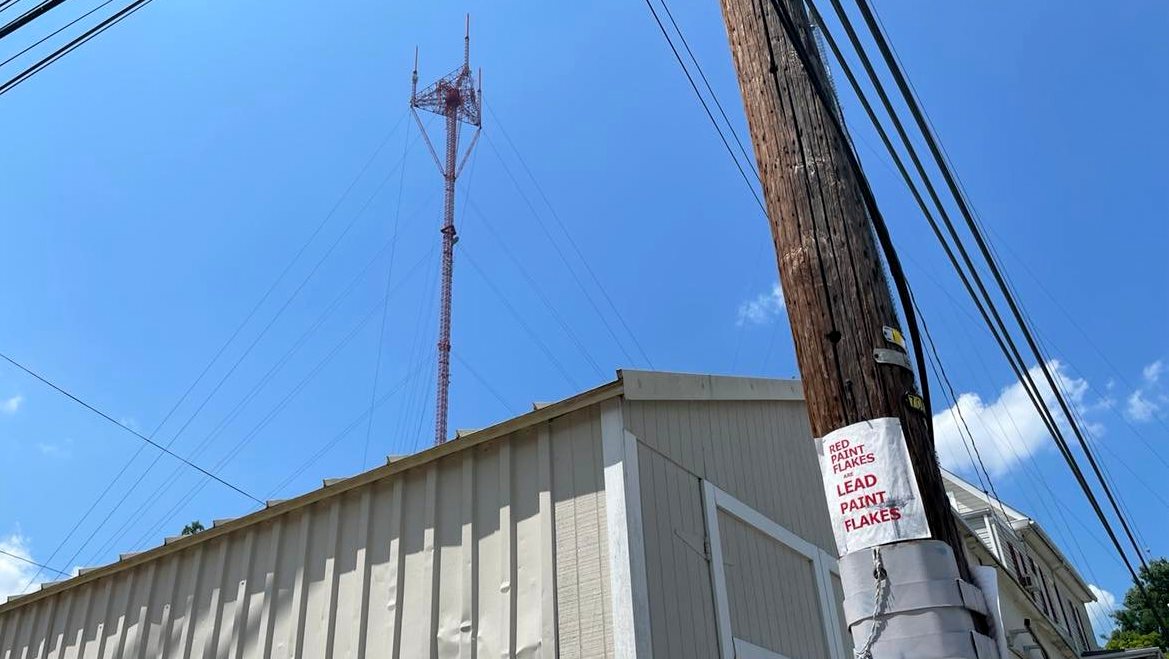 One of the fliers Woodberry residents have been putting up to warn neighbors about lead paint chips from the overhead television tower. (Fern Shen)

The stations’ failure to air information about what happened and what comes next irritates Meyer. “These are TV stations. Their job is communication,” she pointed out.

In an email, Sajecki asked Rick Seaby, whose name was provided as the TTI contact, why the stations hadn’t informed residents about the issue and about the clean-up opportunities and health concerns?

“I am a working single mom,” she wrote. “You collectively manage three broadcast networks. Who is more qualified to get information out?”

“We do appreciate efforts by you and others to ensure that your neighbors are aware of how to obtain remediation.”

The Brewo reached out via the phone number and email provided to the Woodberry community to contact TTI to request clean-up.

“TTI has been working closely with the Maryland Department of Environment over the past four weeks,” TTI said in an emailed response.

The statement noted that the company’s state-licensed lead abatement specialist, A&I Inc., as well as its state-approved industrial hygienist, Advanced Air Analysis, “have conducted cleanup services throughout the community, including private residences, roadways and alleys, and public ”

According to TTI, “every home and business in the affected area has been alerted to the potential presence of paint chips and to the ongoing cleanup via direct mail, door-to-door fliers or in person communication.”

The statement also stated that “all homes that have contacted TTI and granted access for inspection have been surveyed and remediated if paint chips were identified.” 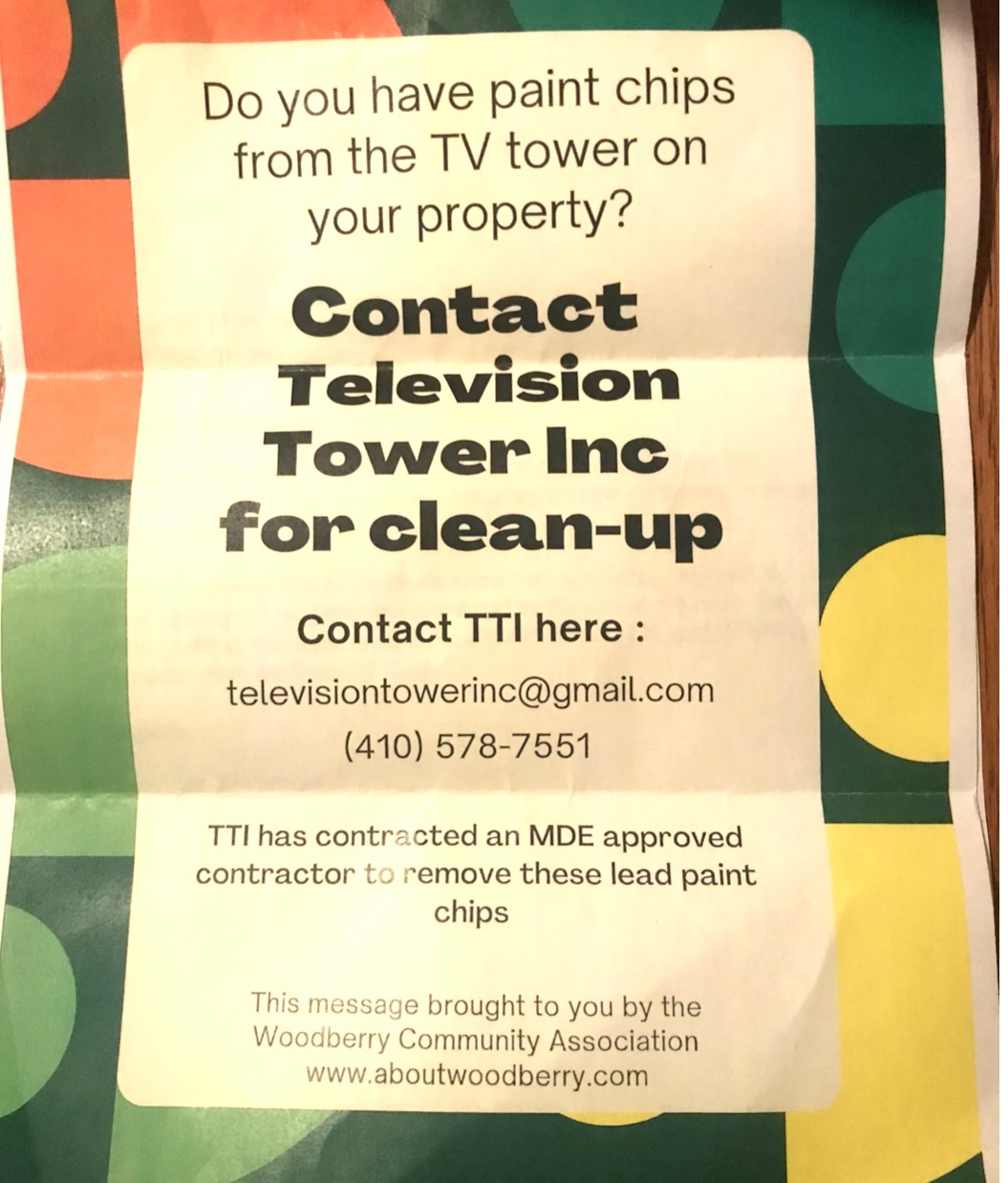 MDE officials did not respond to The Brew’s questions about the community’s complaints and a request for a copy of the remediation plan.

In an August 1 update to the community, the agency said that “high-priority cleanup areas, including a daycare center, adult community center, urban farm and playground are being inspected and cleaned regularly. ”

The properties of 35 households who reported lead paint chips have been cleaned, the statement continued, describing other measures the company is taking at MDE’s direction.

Some residents views the responses as inadequate.

Sajecki said TTI’s direct mail flier (see above) – sent after the community pressed for more outreach – is a poor substitute for the public health messaging it should be employing.

“Does this convey the urgency of a neurotoxin being dumped over your house and streets?” she asked.

When a similar lead chip incident happened in Seattle, “Thr EPA stepped in, and what a difference!” – Megan Johnson.

Megan Johnson, another Woodberry resident who found the red chips in her yard, pointed to a 2018 incident in Seattle where paint flakes from the KIRO News broadcast tower were falling on the neighborhood.

“The EPA stepped in, and what a difference! They were filtering the storm drains, putting bags on the downspouts, testing the soil and water,” Johnson said. “It seemed like they were doing so much more.” 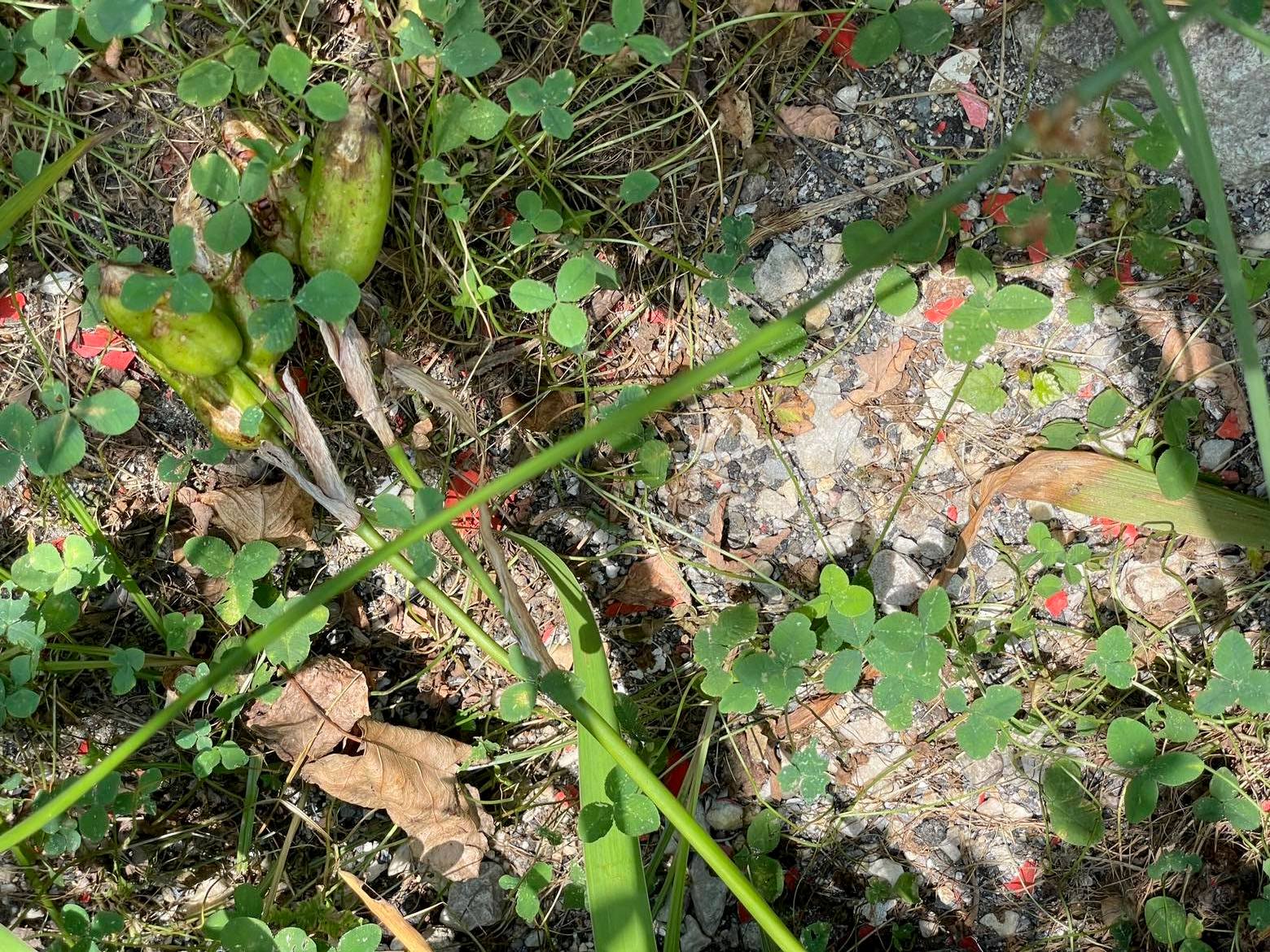 Red paint flakes found yesterday (August 4) in the grass and gutter on the 2000 block of Rockrose Avenue. (Fern Shen) 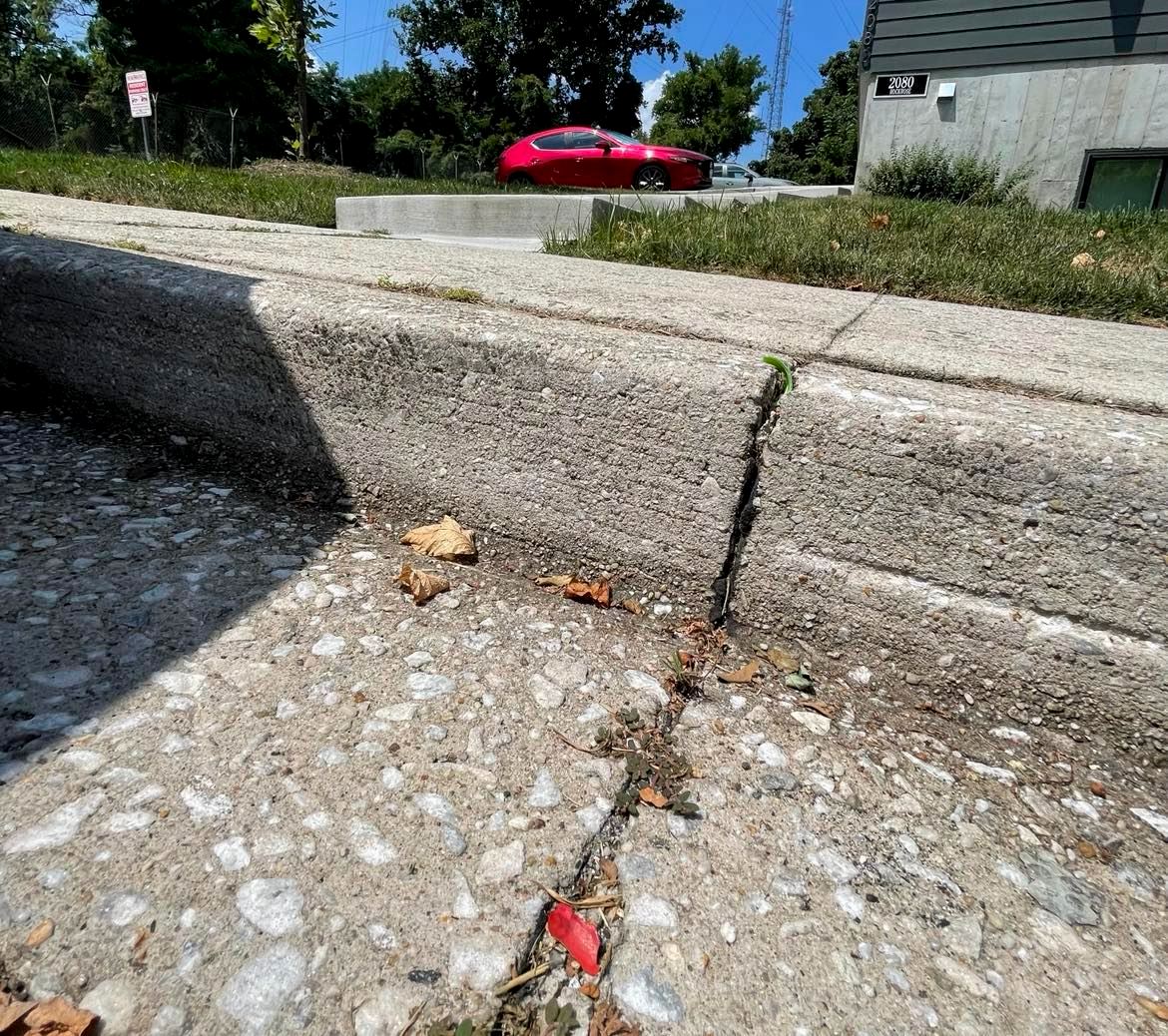 Johnson, like Sajecki, said better outreach is important because the clean-up is not thorough enough to eliminate the problem.

She said that after the six A&I workers sent to clean up her property left, “I went out back, and I was still seeing the red chips.”

on The Brew’s walk around the neighborhood yesterday, paint flakes could be seen in the grass near the playground, next to an apartment building and on the side of the street.

“I realize I’m going to have to just live with the situation,” Johnson said. “I can’t go out and do work in my garden.”

“I don’t blame the crew working on this. It is such an impossible task, and they’re out there every day in the heat,” she said.

“It’s the higher-ups that have to be held accountable. How did they let this happen?” 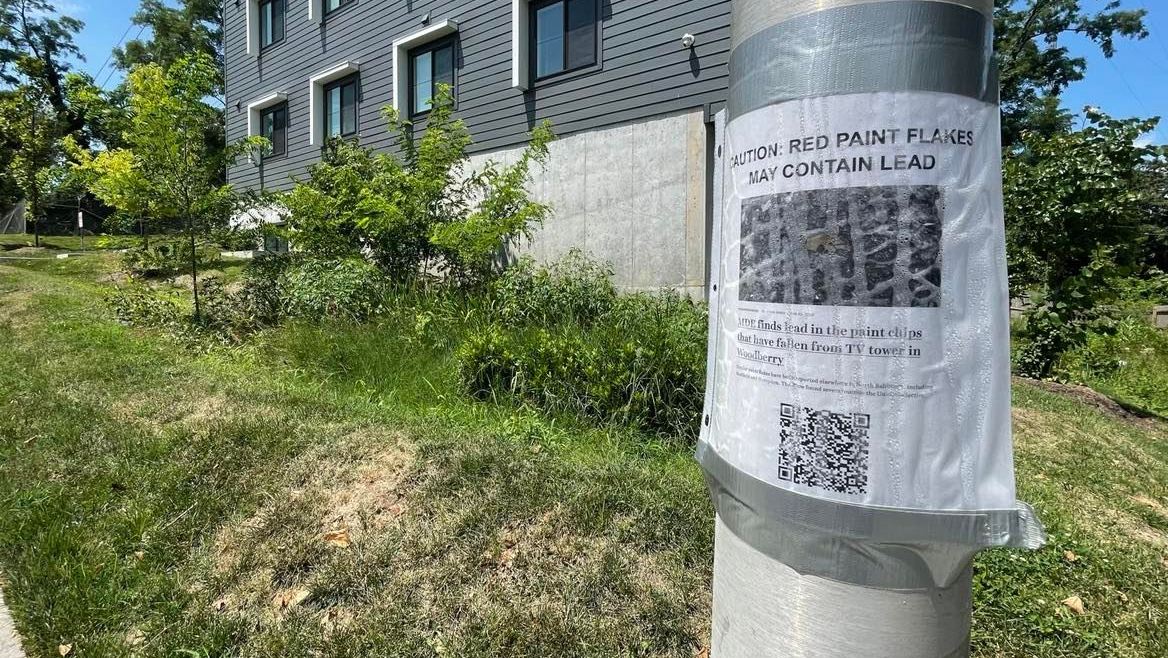 A sign Woodberry resident Megan Johnson taped up includes a QR Code linked to a brew article on the paint flake release. BELOW: A large flake found yesterday near the Rockrose Avenue playground. (Fern Shen) 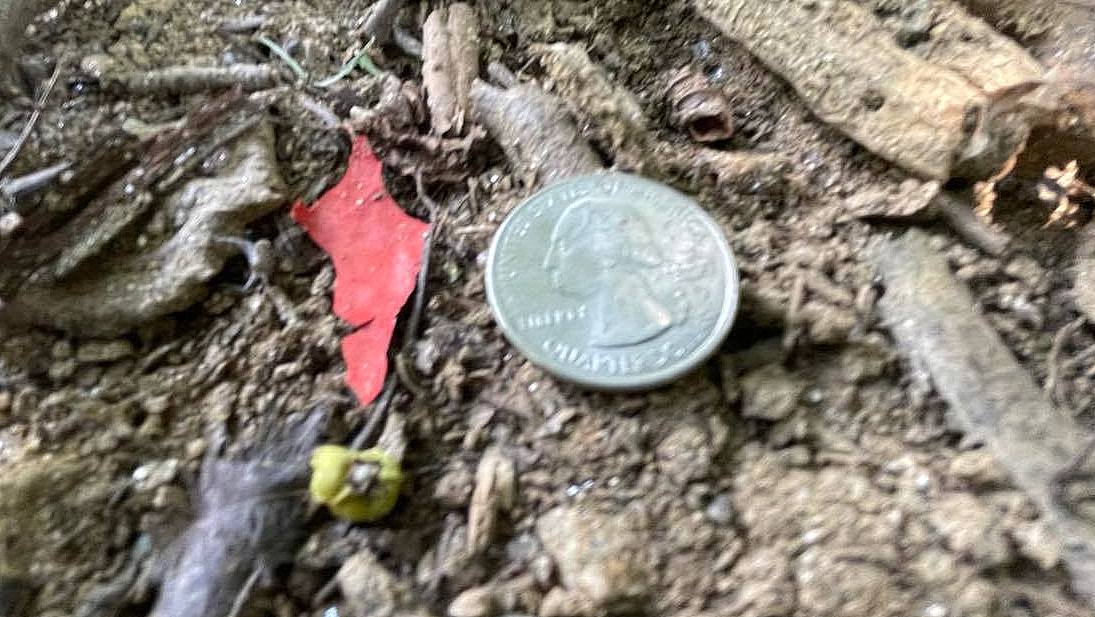