There’s always been an uphill struggle for gender equality in Hollywood. Too often, a female starlet is stuck playing the romantic interest of a man much older than herself. Just think about how rare it is to see a movie where the female love interest is older than her male counterpart. Most of the time, the age disparity between men and women is due to the ego of male stars who want to look like they “still have it” with younger women or because producers hire attractive “it” girls in the hopes male viewers will buy tickets to ogle at them.

The following offenders are not movies like Harold and Maude, The Readeror Lost in Translation, whose storylines examine why someone would fall for an older individual. Every one of these pictures would be better if they cast stars without such a distracting age difference or if they removed the romantic angle entirely.

As Good as it Gets is a fun and well-written relic from the 1990s. Though its treatment of Greg Kinnear‘s character, Simon, a gay man, was considered progressive 25 years ago, the script’s humor hasn’t aged particularly well, mostly due to the constant racist, homophobic and misogynistic insults hurled by Jack Nicholson‘s Melvin. Speaking of being poorly aged, Melvin is the romantic interest of Helen Hunt‘s charming but put-upon waitress, Carol. Carol has been through so much, from caring for her sick child to her broken-down marriage to a thankless job and a stunted dating life. All this is exacerbated by her having to deal with Melvin, an inconsiderate, selfish, obsessive-compulsive man-child, 26 years her senior, to whom she has to serve every day.

to date, As Good as it Gets is the most recent film to pull off the rare feat of both lead actors winning Oscars for their performances. Unfortunately, impeccable acting can’t suspend our disbelief so much that Carol ending up with Melvin is a satisfying conclusion. Besides the massive, unassailable age gap, these characters feel wrong together. After all her suffering and aching for a better life, Carol ends up with Melvin? What a depressing finale for such a likable character. Sure, Melvin learns to be slightly less of a jerk by the movie’s climax. Still, it would have been far more powerful if he evolved emotionally solely due to friendship and not because he’d be rewarded with a younger, attractive girlfriend.

RELATED: 10 Unlikeable Movie Characters You Were Supposed to Like

French director Luc Besson is no stranger to unnerving age dynamics in his movies. Leon: The Professional features a sexualized 11-year-old Natalie Portman lusting over a hitman in his forties. It’s gross. Three years later, Besson’s weird sci-fi epic, The Fifth Element, wasn’t much of an improvement. The Fifth Element starred Mila Jovovich in her early 20s, sporting one most unnecessarily revealing costumes in cinematic history. Not only is she thirsted over by dozens of men twice her age, but her love interest is played by Bruce Willis, a man 20 years older than her.

The relationship is even more sickening when it’s revealed that Jovovich’s character Leeloo was literally “born yesterday” in a lab and that she speaks in an alien language that sounds like the ramblings of a toddler. There’s even a scene where Korben Dallas (Willis) kisses Leeloo while she’s sleeping. Our protagonist, ladies and gentlemen! Knowing all this, it’s no surprise that multiple women have accused Luc Besson of abhorrent behavior. Who could’ve possibly guessed the guy was a creep?

Six Days, Seven Nights is a perfectly serviceable island adventure flick. A fashion magazine editor, Robin (Anne Heche in her late 20s), goes on vacation with her fiancé (David Schwimmer) and soon finds herself fighting for her life against pirates, heat exhaustion, and dangerous wildlife when she and her plane’s pilot, Quinn, (mid-50s Harrison Ford) crash land on a deserted island. Heche and Ford actually have pretty good chemistry, that is, until their relationship turns romantic. Their sudden pivot from bickering strangers who have to reluctantly work together to a lovesick couple desperately pining for each other is hopelessly artificial and contrived. The script’s many defects exacerbate the obvious flaws in the casting.

Their relationship also makes the characters completely unlikeable, as she’s engaged, and he’s well aware of this, but they don’t really care. No matter how charming and charismatic Harrison Ford is, Quinn still comes off as creepy and inappropriate when putting the moves on Robin. 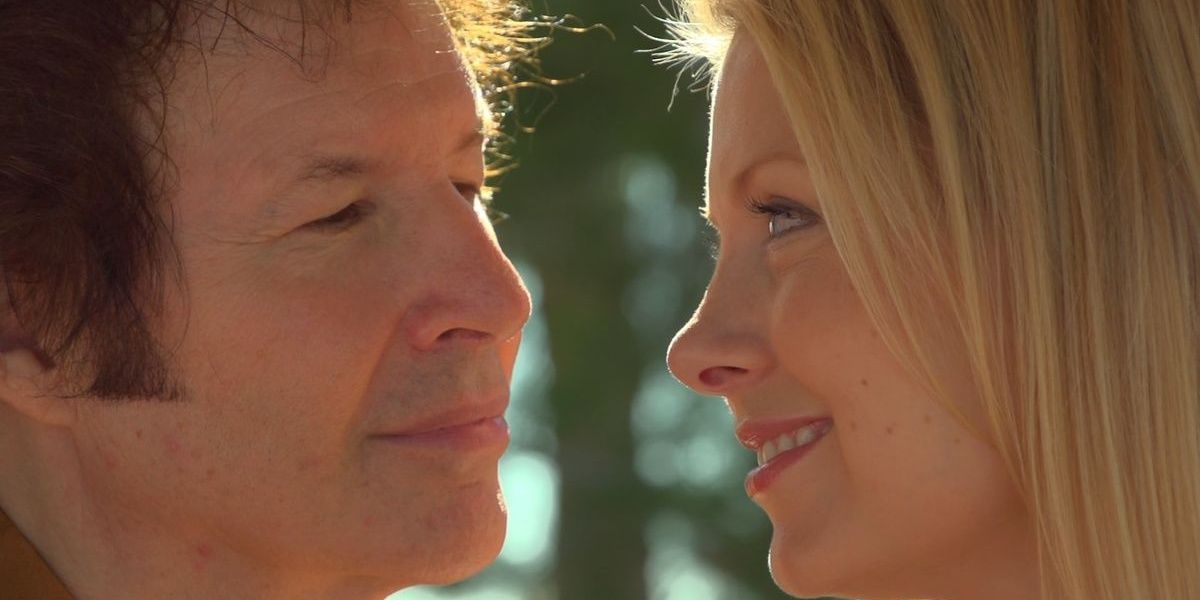 Fateful Findings is the third movie directed, produced, written by, and starring the current golden boy of so-bad-its-good-cinema, Neil Breen. If you haven’t seen any of his microbudget, self-aggrandizing, and hilariously inept conspiracy thrillers, you owe it to yourself to check out some of his work (his fourth project, Twisted Pairmay be the funniest bad movie ever). Tommy Wiseau has nothing on Neil Breen.

In Fateful FindingsBreen plays the infallible protagonist, Dylan’ who rekindles a romance with Jennifer Austry‘s Leah. Dylan and Leah were best friends when they were eight years old. Now, decades later, Dylan and Leah discover each other once more and instantly fall back in love.

Tom Cruise has been a serial committer of the cinematic age inequality between men and women. In American Madehis wife is played by Sarah Olsen, who is 21 years younger; in Oblivionhe has two love interests, the oldest of which (Olga Kurylenko) was 18 years younger, and in the Mission: Impossible series, his wife, played by Michelle Monaghan, is a little less egregious, 14 years his junior. However, the most distracting age gap is in the appalling 2017 failure The Mummy. Tom Cruise has never been so miscast as he was in this misguided blockbuster. To make matters worse, his romantic co-star, Annabelle Wallis, is 23 years younger than him! Granted, Cruise could pass for someone in his late forties (he’s 60 in real life), but The Mummy is still pushing it way too far.

Cruise does not fit the wise crackin’, Indiana Jones-esque Nick Morton in The Mummy. Morton would have been so much more convincing if played by someone 20 years younger. Cruise looks like someone’s uncle role-playing as an adventurer. When Wallis is revealed to be his love interest, it’s unsettling, as it feels like they’d work better playing father and daughter. Luckily, this issue was rectified in this year’s smash hit, Top Gun 2where Cruise’s love interest is played by the much more age-appropriate Jennifer Connellywho is only nine years younger than Tom. 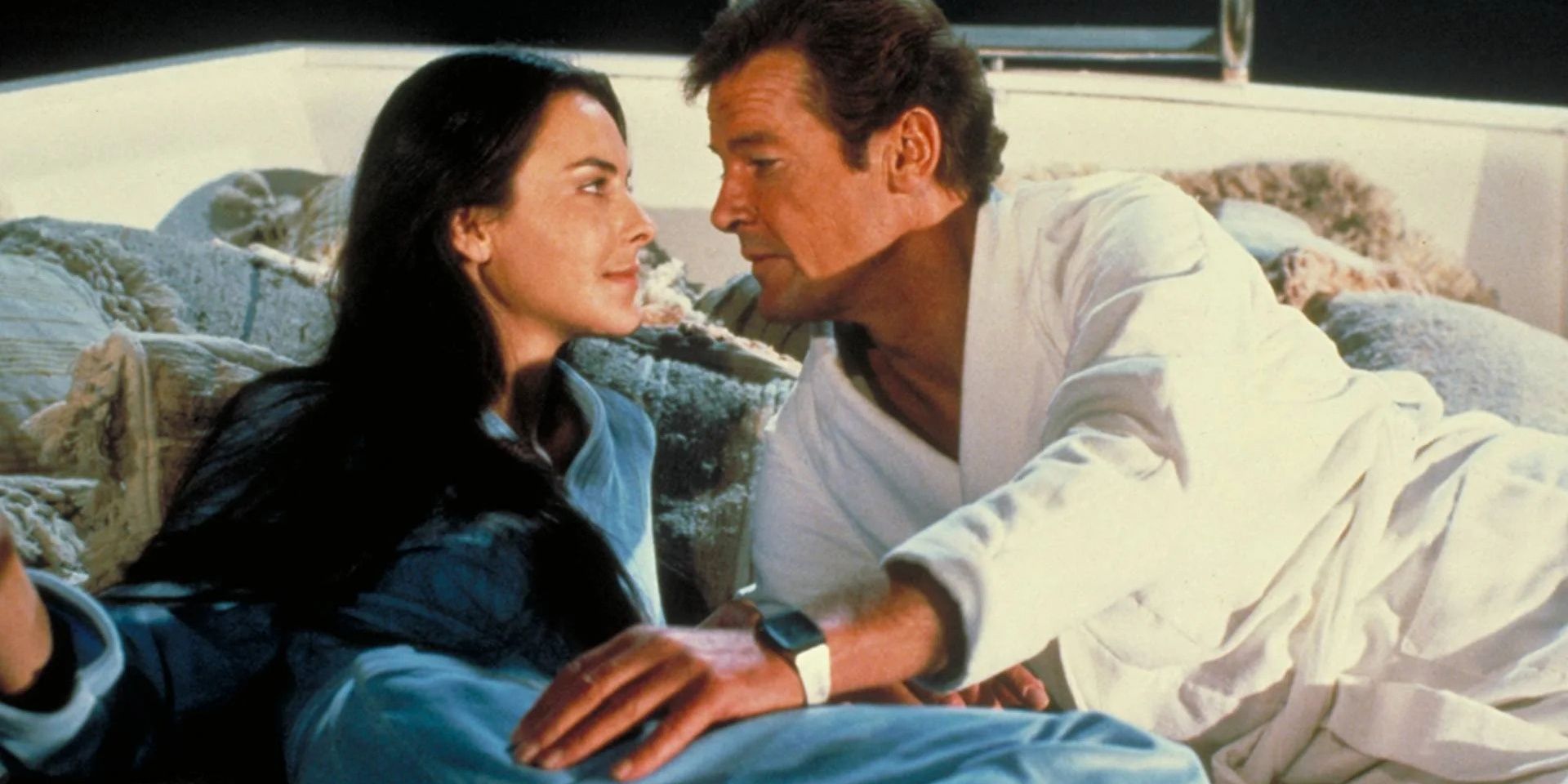 James Bond bedding younger women isn’t just expected in a Bond film; it’s the most iconic sexual dichotomy in world cinema. “The Bond Girl” is as important to the 007 series as high-concept action scenes and complicated gadgets. However, even Bond needs to be kept in check now and then, and the massive age disproportion between Roger Moore and Carole Bouquet is something even Sterling Archer would think twice about.

The most common criticism of Roger Moore’s Bond was that he looked far too old for the part, but the producers certainly didn’t do him any favors when casting a lady 30 years his junior to play his love interest in For Your Eyes Only. James Bond is supposed to be a secret agent, not a babysitter.

from one James Bond to another, the forgettable late-’90s heist flick Entrapment is infamous for its 39-year age difference between co-stars Sean Connery and Catherine Zeta Jones. Preempting the audience’s criticisms of the pairing, Entrapment tells us that the 70-year-old Connery is actually playing a 60-year-old, so it’s actually only a 29-year difference. See? Much better. To put this unsettling coupling into perspective, it’s the equivalent of a movie today casting Linda Hamilton as the love interest of Tom Holland.

Like in Six Days, Seven Nights, the chemistry between Connery and Zeta-Jones is actually pretty decent until romance enters the equation. Hollywood producers often mandate the male and female protagonists get together in the end, regardless of whether it feels organic or not. Without a love story, why would women even watch a movie!? Think of how often you’ve seen a potentially good movie held back by an obligatory, romantic subplot designed to make the film as safe as possible. Luckily, the gender age gap is becoming less prominent, but we still have a fair way to go.