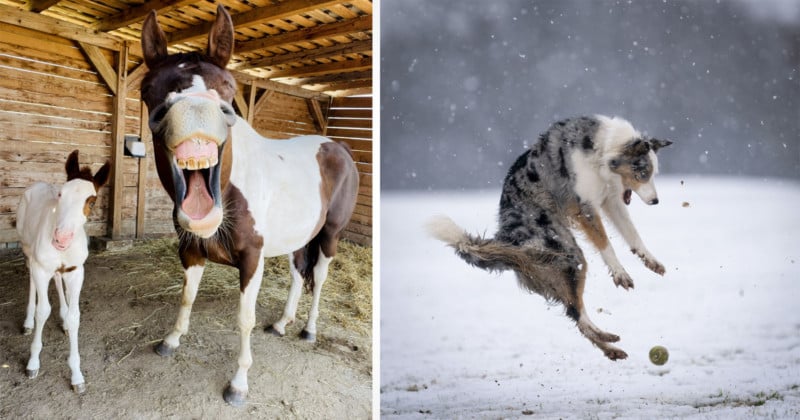 The humorous pet photography competition, the Comedy Pet Photo Awards 2022, has announced this year’s finalists, all of which will compete for cash prizes later this fall.

The annual photo competition, created by professional photographers Paul Joynson-Hicks and Tom Sullam, celebrates the amusing situations pets find themselves in. Not just that, they hope to raise awareness about animal welfare and the vital role pets play in people’s lives.

The judging panel shortlisted 26 best photo entries so far, all of which will go to compete for the top cash prize of £2,000 ($2,505). Same as last year, the contest has partnered with Animals Friends Pet Insurance to donate £35,000 ($43,840) to various deserving pet and animal welfare charities, a big increase from last year’s £10,000 ($12,530) charitable contribution. In addition to the top cash prize, the overall winner will also have the opportunity to select a charity to receive a donation of £5,000 ($6,260), courtesy of Animal Friends Pet Insurance.

The Comedy Pet Photo Awards has also introduced an extra cash prize for the best video submission, and the public gets to participate by voting online for their favorite finalist photo in the first ever Animal Friend’s People’s Choice Award. Hoping to encourage more children to get involved, the contest made the Junior image category free to enter for those aged 16 and under.

“We know that even the shortest stories can hold something special, and the Comedy Pet Photography Awards are a perfect way to share a snapshot of the place pets hold in our lives,” says Wes Pearson, CEO of Animal Friends. “The playful, poignant, and priceless moments captured in the final shortlist have brought us immense joy and show that they’re never just a pet, they are part of our story.”

The overall winner and category winners will be announced on September 13th, 2022. See the shortlisted finalists below:

More information about the competition, including last year’s winners, can be found on the Comedy Pet Photo Awards website.