While horror has consistently called on fictional creatures to emulate people’s nightmares, there is a sub-genre that villainizes the world around us. “Natural horror films” craft stories where humans are placed at the bottom of the food chain, forced to fend off crazed animals that wish to eat them alive.

Killer animal movies have existed since films were first produced, though the genre was popularized thanks to the efforts of Alfred Hitchcock and Stephen Spielberg with their movies The Birds and Jaws. Pretty much every animal has graced a horror movie poster in the decades since, from zombies to Snakes on a Planeand the upcoming beast is set to join the list. While we wait to see Idris Elba punch a lion in the face, let us look back on the greatest films in the genre.

The bloody prequel to Beethoven, cujo follows a rabies-infected St. Bernard who torments a mother (Dee Wallace) and her young son. Trapped in their car in the middle of a heatwave, the pair must contend with the blistering sun as the misunderstood good boy lurks outside, mauling anyone who attempts a rescue.

Based on the novel by Stephen King, the film remains one of his favorite adaptations of his work. While the film itself does not do anything particularly special, the concept of man’s best friend becoming the villain is interesting enough to keep this taut thriller barreling on. Just be prepared to “aww” a lot as cujo murders his victims.

Hot on the heels of Psychothe “master of suspense” Alfred Hitchcock followed up his horror classic with The Birds. When a wealthy socialite follows a love interest to California, they become trapped in a whirlwind of violence as birds begin to attack people.

The Birds builds tension by starring a villain that is not so easy to avoid, especially when the swarm begins to shatter through windows. It all comes together to create one of Hitchcock’s best films, and a scenario more terrifying than being harassed by the seagulls at the beach during lunchtime.

The Birds is available to stream on Showtime.

Part of the sub-genre that combines killer animals with natural disasters, crawl adds alligators into a hurricane (take that sharknado). Learning that her father’s home lies in the eye of the storm, professional swimmer Haley (Kaya Scodelario) drives out to check up on him. The weather worsens, however, and soon the duo discovers numerous alligators lurk in the rising floodwaters.

Directed by modern horror maestro Alexandre Aja (The Hills Have Eyes, Piranha 3D), crawl scales back on his trademark gore to instead ramp up the tension as Haley evades the deadly predators throughout the flooded home. The result is an effective thrill ride that never lets up, making crawl one of the best horror movies in recent years.

The best shark movie since Jaws, Deep Blue Sea is a wildly entertaining thriller. Set in an underwater facility where sharks are being genetically engineered to find a cure for Alzheimer’s, the situation becomes dire when the highly-intelligent creatures escape and target the trapped employees. The gathering of scientists, investors, and support staff are forced to work together as they try to live long enough to reach the surface.

Deep Blue Sea is available to stream on HBO Max and Tubi.

RELATED: 10 Shark Week Movies That Are So Bad They’re Good

forget Peter Jackson and Taika Waititi, Black Sheep is New Zealand’s greatest export. When meek Henry returns to his childhood home to sell his share to his brother Angus, he discovers that his sibling has been running illegal experiments on sheep. The study turns the usually docile animals into carnivorous predators, and the man-eating animals predictably break loose.

A throwback to the early work of Jackson, such as Bad Taste and Dead Alive/brain dead, Black Sheep piles on the gore as the zombie sheep terrorize the New Zealand countryside, devouring anyone they cross paths with. The film adds a helping of humor to the mix to create a memorable horror-comedy that is far from baaaaad.

Black Sheep is available to stream on Tubi. 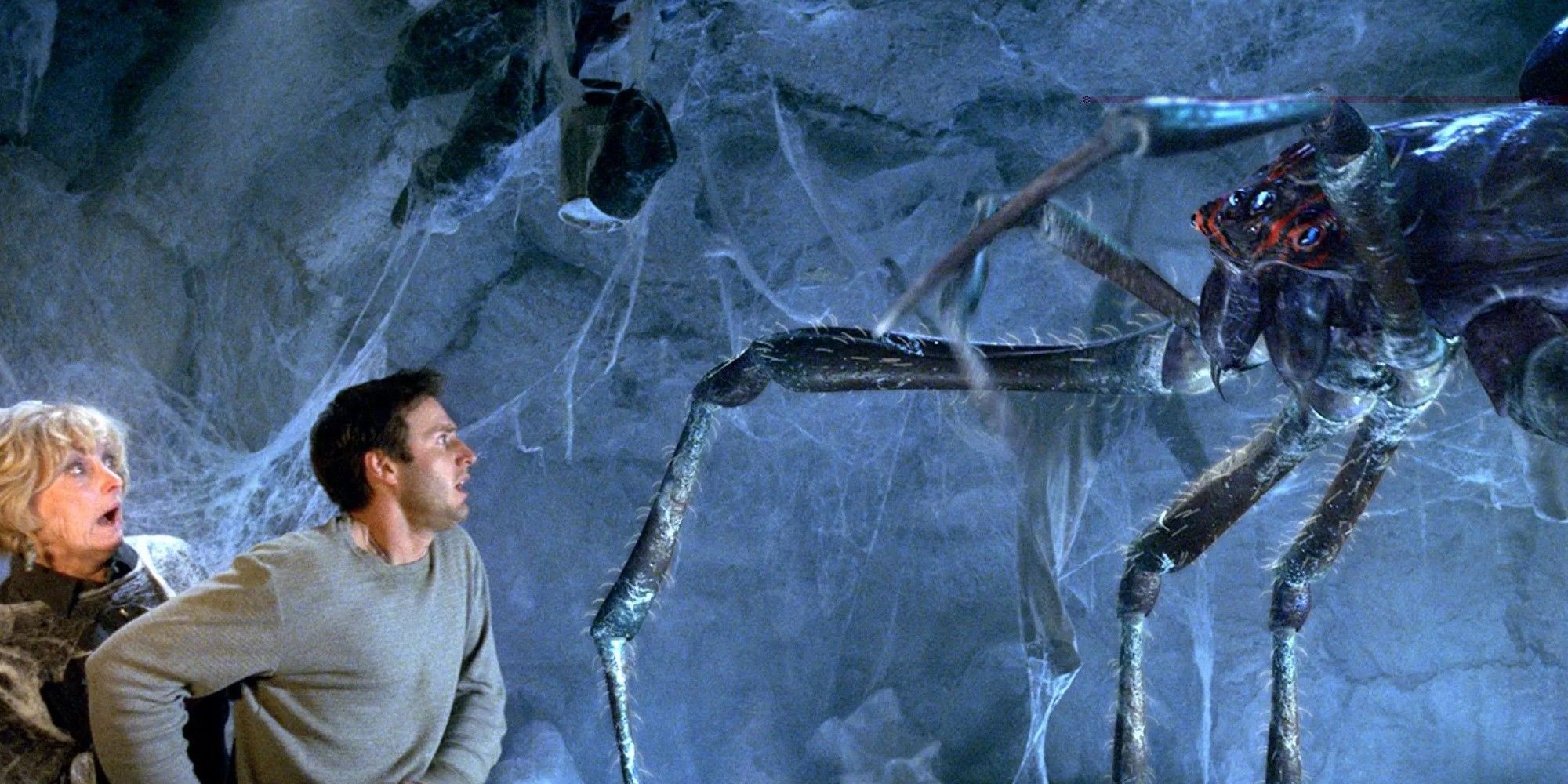 A throwback to the campy monster movies of the 50s, Eight Legged Freaks is a guaranteed good time. The film follows the residents of a fictional mining town who are overrun by giant spiders that have been exposed to toxic waste. The arachnids come in a variety of forms, from jumping spiders to creepy trap-door spiders, causing a variety of problems for the survivors as they combat the threat.

starring scream aluminum David Arquette and a teenage Scarlett Johanssonthe film is a bloodless affair that works well as a gateway movie for parents to introduce their children to the horror genre.

Eight Legged Freaks is available to stream on Tubi.

Further proving that everything in Australia wants to kill you, Razorback follows a giant boar as it carves a path of destruction through the outback. After his wildlife reporter wife falls victim to the man-eating creature, American Carl Winters travels to the sunburnt country to investigate her disappearance, ultimately encountering the massive beast.

a cult classic, Razorback has endured as one of Australia’s most popular horror films. The animatronic killer pig is terrifying as it towers over its human prey, and the combination of this monster with the well-documented dangers of the Australian outback creates a harsh atmospheric thriller.

Somehow making cockroaches worse by giving them the ability to kill you, mimic is nightmare fuel for anyone who fears the sight of the creepy crawlies. When scientists discover a new form of insect is killing people underneath New York, they journey into the claustrophobic subway tunnels to save the city.

The Hollywood debut of Guillermo del Toro, mimic is an early example of the master filmmaker’s talent for creating unforgettable creature designs. The killer roaches are as gross as expected, and their disturbing appearance heightens the tension as our heroes fight to survive without the aid of bug spray.

mimic is available to stream on HBO Max.

RELATED: The Films of Guillermo del Toro Ranked from Worst to Best

A character study of a lonely young man and his pet rats, Willard explores how far our animal companions will go to protect their masters. Social misfit Willard (Bruce Davison) is mistreated by his mother and his boss, instead finding solace in the swarm of rats that have made a home in his backyard. When events push him to his breaking point, Willard uses his new friends to harm those who have hurt him.

The movie was remade in 2003, directed by The X Files and Final Destination scribe Glen Morgan and starring Crispin Glover in the lead role. Rather than a direct remake, this film operates as a reimagining of the core themes of the original and is a worthy companion piece.

Willard is available to stream on Amazon Prime Video, Peacock, and Tubi.

The ultimate creature feature, Jaws is an undisputed masterpiece. When a great white begins to feast on the residents of Amity, a small island town, the sheriff is forced into action to save his charges. Joining forces with a marine biologist and a shark hunter, the three men travel out to see to slay the dangerous creature.

The original summer blockbuster, Jaws was a massive success and set precedents that films and their marketing campaigns still follow today. It remains one of Stephen Spielberg‘s best films and has been immortalized in popular culture thanks to its instantly recognizable theme music and the line “you’re gonna need a bigger boat.”

Jaws is available to stream on AMC+ and Tubi.

NEXT: 9 Eco-Horror Movies That Show Nature Fighting Back